Soccer For Cartoons: How The Beautiful Game Was Made For Saturday Morning 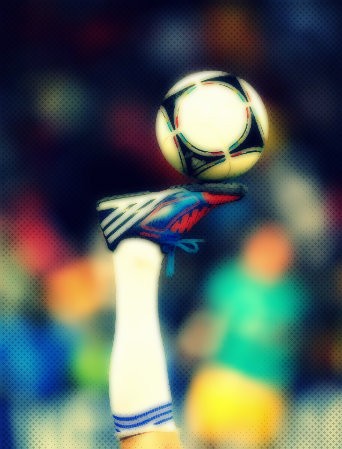 When you grow up in America, the phrase “Saturday morning” evokes one indelible memory burned into sugar-addled minds by hours of blissful TV consumption: cartoons.

For a brief window of time in our school age years, Saturday morning cartoons were like 52 little Christmas mornings a year, each one an orgiastic explosion of teeth-rotting cereal goodness and classic animated high jinks.

No teachers, no tests, no school—just pure, unadulterated cartoon action, followed by a few hours running around the neighborhood like we were on fire to burn off the excess energy. For those of us lucky enough to possess a reasonably idyllic childhood, nothing could beat Saturday morning cartoons.

But then you grow up, and cartoons are only half as entertaining as they once were, and your Saturday mornings become tortuous drudgery.

You still get up as early – because there’s nothing like putting in 50 hours a week at the office to fine tune a body clock and making “sleeping in” the fevered dream of madmen – but there’s hardly any reason to.

College football starts somewhat early, especially if you live on the West Coast, but rarely do those games offer much more than mild distraction. It’s hard to convince your significant other that you absolutely have to sit down and watch two Big Ten teams repeatedly run into each other, slowly, for three hours straight.

So you could watch cartoons, but it won’t be the same, and cartoons are terrible these days anyway. In almost every way that matters, sports takes the place of cartoons in the part of our brains that cares about being entertained because it doesn’t have to regulate breathing or remember where you put your keys.

If only there was some sport to enjoy on a Saturday morning that could fill those hours, that could bring back that sense of jittery anticipation that you felt building up through week as a kid. If only there was something to look forward to on Saturday mornings, besides the buildup to college football (which is obviously not everyone’s cup of tea).

But there is, of course. It’s soccer, the sport alternately called “the world’s game” or “the beautiful game” depending on whether the writer wants to convey the sport’s massive appeal (read: America is different) or its fluid game-play and the insane skill level it takes to play it properly.

The former is just a fact, perhaps a guilt-trip; the latter is a reason you’ll eventually fall in line with the rest of the world and accept soccer into your life.

Soccer’s breadth is massive, so much so that it makes the plethora of college football that hits TV screens on fall weekends look paltry by comparison. Every country has a league, typically with 20 teams. The standard European season runs from August to May, a span that is double the college football season and five months longer than the NFL season.

Looking for something to carry you through those dark days post-Super Bowl? “Soccer” the answer the question your soul beams into the ether each and every weekend from February on into the hottest days of summer.

So where to turn? With an endless number of leagues, knowing where to focus attention can be difficult. Luckily, television is idiot-proof, and high level professional soccer is on offer on a channel you already get and probably watch every day of your life.

ESPN’s deal with the English Premier League makes the important decision for you, because it’s there for the taking nearly every Saturday morning for the vast majority of the year. Not only is England’s top league one of the best in the world, the time differences between Greenwich Mean and those of the US make watching a lazy Saturday morning affair.

It needn’t be complicated. Soon, you might even find yourself latching on to a team (or two, you heathen), but becoming a passionate supporter of Manchester United or Arsenal isn’t necessary to enjoy the product. These are some of the best athletes in the world competing at the sport’s highest level in a league that rivals, and often surpasses, the NFL for pageantry.

There are no playoffs (this is weird, I know – you’ll get over it), and relegation looms large, so every game is massive in a way that a mid-season tilt between the Chiefs and Browns simply cannot be.

There’s a school of thought that Americans who only pay attention to English soccer are uncultured simpletons (relatively speaking); eventually, you might feel this way too, but as an entry point into the game, the Premier League is too obvious, too accessible and simply too good.

As mentioned, the breadth of soccer is huge, and might one day consume you as you discover and become enraptured with Spanish soccer, or Italian soccer, or German soccer, or any of the myriad alternative competitions that exist to pit teams from different leagues across Europe against each other to crown one overall champion (the biggest, fittingly enough, is called the UEFA Champions League, though not every team that participates is a champion; the final of the Champions League is bigger than the Super Bowl).

There’s an American league, of course, Major League Soccer, which operates under slightly different guidelines. The season runs March to November for one, and there are playoffs, but the league has it’s own charms. If you find yourself looking for something more local and give MLS a chance, you can enter a wonderful zone of soccer fandom that allows for year-round professional soccer enjoyment.

But, one step at a time. First, flip by ESPN or ESPN2 on a Saturday morning and give the English game a chance. It’s no cartoon extravaganza, but as a two-hour, commercial-free stand-in, it’s just about the best we adults could ever ask for.

Jason Davis is a freelance writer who covers soccer and other sports for outlets like The Guardian, ESPNFC, The Score, and others. He lives in Virginia.