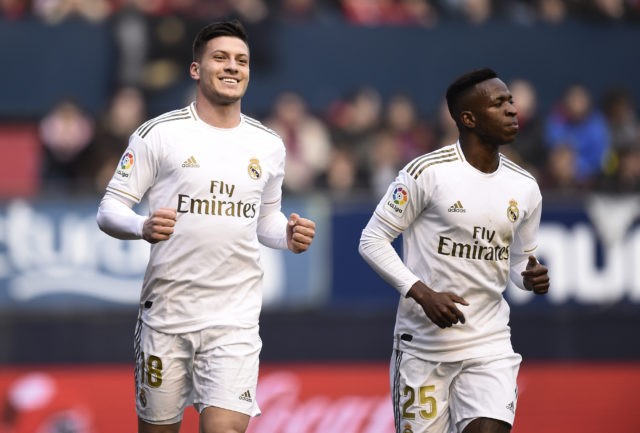 Tottenham Hotspur and Chelsea have been linked with a move for Real Madrid striker Luka Jovic, and it’s high time Everton also joined the race.

Both Everton and Tottenham have endured a difficult campaign, and while nobody knows when the current season is going to end or how long the club will get to prepare for the summer transfer window, plans must surely be underway already.

The Athletic claimed last week that Carlo Ancelotti will primarily be focusing on signing a midfielder, a solid defender, and a right-winger. However, the Italian must not overlook his forward options which equally require attention.

Dominic-Calvert Lewin has been superb for the Toffees. However, Moise Kean is yet to justify his price tag, and Cenk Tosun is facing an uncertain future at the club. Richarlison has been used upfront in a 4-4-2 system, but he is best used when playing as a left-winger.

According to a recent report from The Mirror, Real Madrid are looking to offload Luka Jovic, and he will be offered to both Chelsea and Spurs.

The £50m summer signing left self-isolation to fly home to Serbia last week, which has angered both his club and his country. The European country has strict rules in place to prevent the Covid-19, and the young striker was forced to apologize.

Jovic scored 27 goals in 47 outings for German side Frankfurt last season, but he hasn’t been able to replicate the form for Los Blancos, managing only four goals. While Madrid gave the player permission to return home, they were unimpressed with the way he ignored the rules.

His future remains unclear at Real Madrid, and Ancelotti must try to bring him to Goodison Park. Probably, the move to Madrid may have come too soon for him. He needs to play regularly and can take his game to another level playing under a world-class manager like Ancelotti.

With Everton setting an ambition to play Champions League football, Jovic is the type of signing that can take the club forward. He is exactly the type of player Everton should look to sign, and given Ancelotti’s previous connection with Madrid, the move would suit all parties involved.