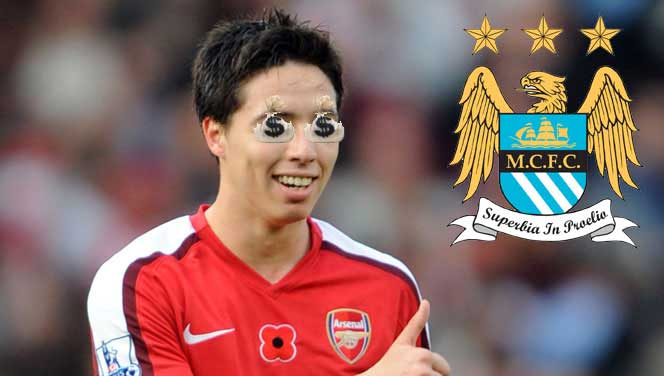 Samir Nasri‘s departure means Arsenal lose another world class player after their prolific captain Fabregas signed for Barcelona a week ago. However the difference is very clear. Fabregas left after serving the club for 8 long years and he stayed for just 3 years. Cesc left for his boyhood club wishing Arsenal the best and Nasri opted to play against his former side. So he leaves for the retirement home of Gunners by joining the likes of Clichy, Adebayor, Toure and Viera where he can earn the massive salary desired the most. One thing is for sure, he’s no Arsenal Great and No different to Adebayor.

“I am being considered a worthy replacement for Henry while not deserving his salary. The question lies on this level.”

Adebayor and worthy replacement of Thierry Henry, perhaps one of the biggest jokes I’ve heard. His actions did speak louder than any words after his senseless celebration against Arsenal and earning ban for violent conduct trying to hurt Van Persie. Although after leaving he claimed that he never wanted to leave but the world knows the fact it was just for monetary reasons.

Nasri stands at the same point. Try to remember his words in 2010. Well, let me help

“It is annoying. The work we do is not getting the credit it deserves because we are not winning silverware”

Now what is left for him to say after leaving for a very similar team? Perhaps when he opened the mouth there, he was the one who felt so unfair and annoyed and now won’t even realize at all that what he has done is unfair. Well, there’s nothing new in it, one can always come up and repeat the words of Fernando Torres that footballers don’t have to be straight forward all the time, and may deceive the fans as well.

Nasri showed little loyalty, Arsenal might have granted 20,000 raise on his 90,000 a week wage but not more than that, 110,000 was the sum Fabregas earned. In any case, the trick is simple for players like him; Arsenal just could not break the bank and match the sum to make him earn 10-15 million annually. Big spending indicates ambition but it’s clear that his ambition is $ ₤ € .

Somehow, City has turned into a bigger club than Arsenal, for Nasri atleast? There is no need for him to lie and wish the fans and the club well when he has chosen to play at their expense; and must not expect the gunner fans to wish him well when all important for them is Arsenal’s success and not his.

So from now on, Nasri may count the millions, and easily forget about the club that made him the star he is now.