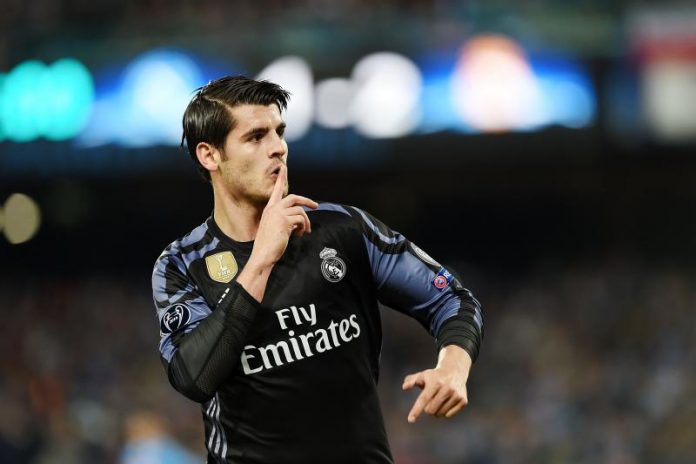 Real Madrid striker Alvaro Morata has taken a break from his honeymoon and has returned to the Spanish capital in an attempt to speed up his long-awaited move to Manchester United, the AS report.

The 24-year-old is reportedly inching closer to complete his switch to England, although Manchester United and Real Madrid are yet to reach an agreement for the forward’s transfer fee.

Despite being handed just 14 La Liga starts last season, Morata managed to score 15 goals and provide four assists and is looking to leave the Bernabeu for the second time in three years in pursuit of regular first team action.

The Spanish striker was celebrating his honeymoon in Ibiza after marrying Alice Campello last week and according to reports from Spain, the highly-sought striker has returned to Spain to seal his proposed move to Old Trafford this summer.

AS claim that the Spain International has had several phone calls with Red Devils boss Jose Mourinho, who is currently in Portugal to attend his father’s funeral who sadly passed away at the age of 79 on Sunday.

Mourinho handed Morata his first team debut in 2010 while he was in-charge of the Los Blancos and the Portuguese coach continues to highly rate the Real Madrid youth product.

The Spanish outlet add that Manchester United have tabled a €74 million bid for Morata, although Real Madrid remain reluctant to lower their asking price said to be between €85 to €90 million.

It is believed that Morata, who does not wants his transfer to become a soap opera, is determined to become a Manchester United player before July 8, which is when the English giants return to pre-season training ahead of the 2017/18 campaign.

The next few hours are reported to be very crucial in this worldwide anticipated transfer saga as Morata and his agent try to negotiate a deal with Real Madrid officials.