QPR midfielder reveals Barcelona and Anzhi’s interest in him 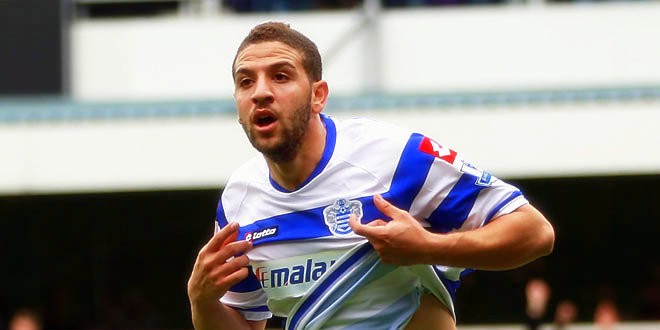 QPR midfielder Adel Taarabt has revealed that Barcelona and Russian club Anzhi Makhachkala have inquired about him, but the Moroccan international stated that he is happy at the club.

Taarabt was the hero QPR’s win over Fulham last weekend. The midfielder scored two goals in the match to stop the London club’s 17 match winless streak in the Premier League this season. But the Moroccan’s future at the club remains in doubt despite signing a new four year contract.

The 23-year-old has now revealed Barcelona and Anzhi’s interest him. Although Taarabt insisted that he is happy at the London club under new manager Harry Redknapp, he is unsure what would happen if any big money offer comes in for him.

“I have been told that the president of Anzhi and people from Barcelona have asked about me.

“But I have just signed a four-year contract with QPR, and the chairman Tony Fernandes has told me that he will not sell me.

“I don’t know what would happen if someone offered £20million for me. But I love the club and the fans, and they love me too.”

Taarabt was been linked with a lot of big European clubs since last season. PSG, Arsenal, Napoli, Juventus and Barcelona were previously rumoured to have shown interest in signing the QPR talisman.

The midfielder is expected to be selected in the Morocco’s national team for the upcoming African cup of nation. Although manager Harry Redknapp has urged him to stay back and help out his team in their bid for survival, the 23-year-old has reiterated his desire to play for his country.

Taarabt insisted that if Moroccan national team manager Rachid Taoussi selects him for the tournament, he won’t be able to turn them down.

“Harry Redknapp told me not to go. But I told him, ‘Boss, if they call me up, I can’t turn them down.

“I love my country and the Moroccan people, and football means a lot to them. I warned him the only solution would be if the coach does not pick me.

Taarabt’s form has been inconsistent since QPR has gained promotion to the Premier League. He has failed to replicated the performances he showed in the Championship. But new manager Harry Redknapp used him in different role in his last match and the Moroccan showed signs of being back to his best.

Redknapp played Taarabt in a much central role in behind Djibril Cisse, almost as a second striker, and the midfielder showed why he is a wanted man.

Despite all his talents, Barcelona’s interest in him is inconceivable. The Catalan giants have too many players in their squad jostling for a place in the attack and midfield to add a new one. In fact most of Barcelona’s talented youngsters who have been promoted from their famed academy hardly get any chance to play for the first team.

But clubs like Anzhi, Napoli, PSG and Juventus are viable options for the Moroccan if he wants to leave the London club. If Taarabt consistently performs the way he did against Fulham last weekend, QPR are sure to receive lot of inquiries about the midfielder in January. It would be interesting to see how long owner Tony Fernandes decides to hold onto him.