Liverpool midfielder Philippe Coutinho is a man in demand.

The Brazilian has established himself as Liverpool’s best player and one of the best in the Premier League. The likes of Barcelona and Paris Saint-Germain have been linked with the former Inter Milan midfielder in the past.

As per the latest report from Le10 Sport, Ligue 1 champions PSG have already contacted Liverpool regarding a summer transfer. Apparently, the French outfit have also made Coutinho’s entourage aware of their interest in the player. 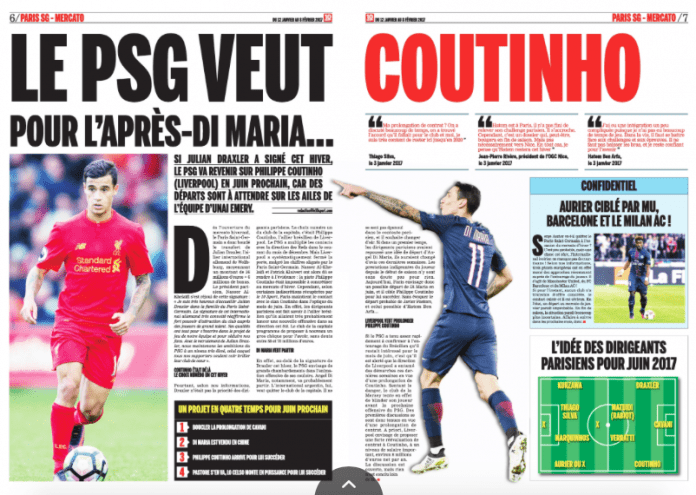 The report adds that Liverpool rejected a €25m offer for the player back in October and therefore PSG plan to return with a massive offer in the summer. The French outfit are ready to offer around €50m-70m for the 24-year-old attacking midfielder.

In an attempt to ward off interest in their player, Liverpool are now prepared to offer Coutinho a new deal worth £130,000-per-week.

Recently, Klopp issued a hands-off warning to Coutinho’s suitors and it is unlikely that the Reds will sell their best player at the end of this season. However, one cannot doubt that financial muscle of clubs like PSG. The Ligue 1 side have the resources to convince Liverpool to part with their prized asset.

Le10 Sport believe that Coutinho will be signed as a replacement for the Argentine winger Angel Di Maria. The former Real Madrid and Manchester United seems disinterested and is apparently angling for a move away. The report also reveals that PSG only signed Draxler this month because Coutinho was not for sale.