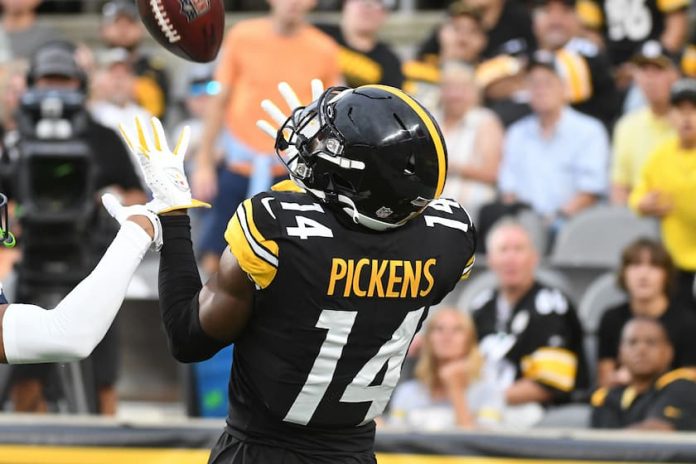 George Pickens provided fans with a catch of the year candidate after an incredible acrobatic catch in last night’s game.

The 21-year-old wide receiver had fans jumping out of their seats after he caught the ball at what seemed to be an impossible angle. Pickens also caught the ball with one hand gaining the Steelers their first touchdown of the night.

The catch has even caused fans to compare it to Odell Beckham Jr as he has what fans consider to be one of the best catches of all time. The New York Giants star even gave a reaction on twitter saying: “This catch is filthy”.

Are you serious, George Pickens? What a one-handed grab!#PITvsCLE on Prime Video
Also available on NFL+ https://t.co/uF4okqrMww pic.twitter.com/4mDGzOOoZu

Pickens exited preseason as one of the Steelers stand out performers but has struggled to find that form since the NFL returned. Before last night the WR had only made two catches in two games.

Pickens revealed in the buildup to the browns game that he believes he always makes himself available for a catch even with defenders close by: “I just say that because I’m a big guy that runs in the low 4.4s, I always have a step on somebody and my step is naturally longer than the other person, and I’m actually fast.

“I’m always (going to) have a step and always feel like, 99 percent of the time, I’m open even though the ball gets there in the air and (the defender) gets time to catch back up. But I’m open as soon as I get off the line.”

Sadly, his outstanding catch didn’t spur the Steelers on to victory and they lost 29-17 at the FirstEnergy Stadium. The Steelers come up against the Jets in Week 4 and Pickens will be looking to replicate his astonishing catch to help the Steelers go 2-2.