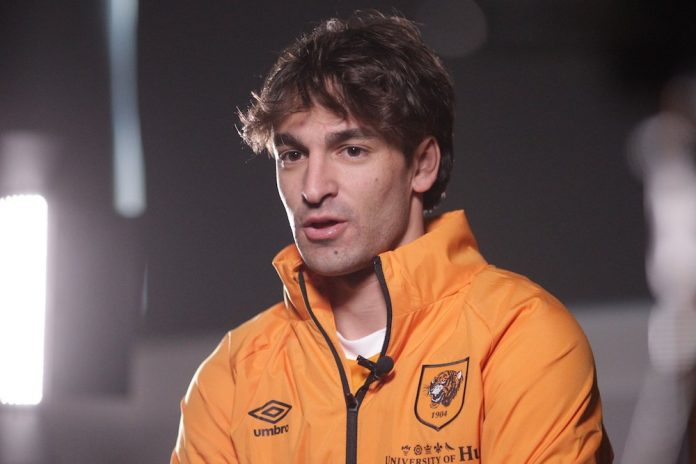 Liverpool winger Lazar Markovic has completed his transfer to Hull City and was presented officially earlier this evening.

? | “I hope that my actions will speak louder than words and I can prove myself to the club and to everyone in English football.” @LMarkec50 pic.twitter.com/S08MTUozSE

The Serbian winger returned from his loan spell at Sporting Lisbon after failing to impress. Both Liverpool and Sporting agreed to terminate the loan deal. However, the Reds do not plan to use the player themselves and have therefore decided to loan him out once again.

Markovic joined Liverpool in 2014 for a fee of £20 million and has made 34 appearances in total for them. The 22-year-old was regarded as one of the hottest young talents back then, but Markovic never managed to justify the hype surrounding him.

The winger spoke to the club’s media after completing his move to Hull City today and claimed that he will let his actions and performances do the talking. He also revealed that he is looking to prove his worth to the rest of the Premier League over the next few months. Furthermore, the Liverpool player is looking forward to working with the new Hull City manager Marco Silva.

I hope that my actions will speak louder than words and I can prove myself to the club and to everyone in English football. I joined Liverpool when I was very young and have not yet had a long run in the side to show people what I am capable of. I hope to use this loan spell with Hull City to prove myself in the best league in the world because I feel there is lots more to come from me. Marco convinced me that this was a good move for me and I am very happy to be here. He is a very successful coach from abroad and has started well at this club too. I look forward to working with him and the rest of the staff. Everyone is very confident that we can keep this club in the Premier League and I am looking forward to playing my part this season. We have a good coach and a good squad so we have to be confident of our chances of remaining in the division.