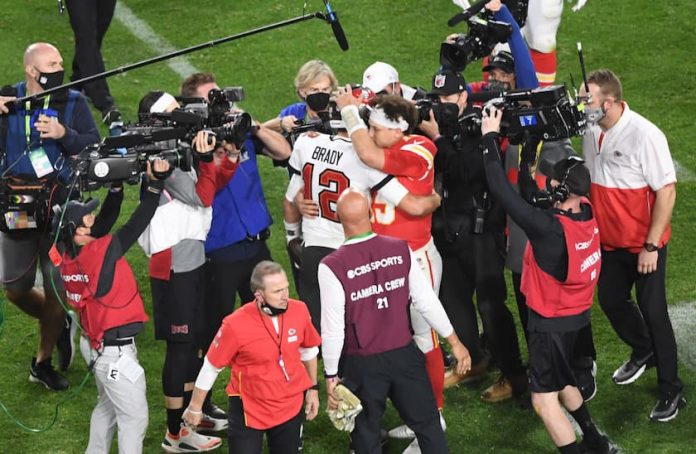 Kansas City Chiefs quarterback Patrick Mahomes has said he would like to follow in Tom Brady’s footsteps and play until he is 45 as long as his body allows him to.

If Mahomes was to play until Brady’s age, we would still see him playing in the 2040 NFL season. In a recent interview Mahomes revealed his intentions: “I want to play as long as I can play, and I can still have a chance to help the team get better,

“Obviously, it’s hard to play until you’re 45 years old, and I don’t want to be out there just hanging on. You see what Tom is – he’s still playing at a very high level.

“I think that’s why it’s hard for him to kind of give it up – when you’re playing at a high level you don’t want to leave it. For me, I’m going to try to keep my body in the best shape possible and as long as they’ll let me play and I can play at a high level, I’ll be out there.”

Tom Brady holds several records from his time in the NFL including all-time leader in passing yards and touchdown passes, he even topped those categories last season at the age of 44. He also holds the record of seven Super Bowl wins. Brady recently revealed his opinions on Mahomes young career in a recent interview.

Tom Brady on Patrick Mahomes: “Everything he’s done in his young career has been nothing short of exceptional.”

Being 18 years Brady’s junior, Mahomes only holds one Super Bowl title at 27-years-old and had the chance to make it two against Brady and the Buccs in Super Bowl LV however the Chiefs lost 31-9.

This Sunday Mahomes and Brady will face off for the first time since the Super Bowl. It could also be their last depending on what Brady decides to do at the end of the season considering he retired and then unretired in the offseason.