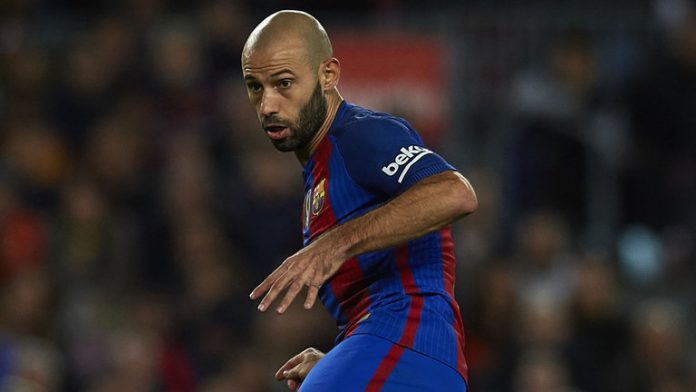 According to Diario Gol, Paris Saint-Germain are considering an approach for Barcelona defender Javier Mascherano, reports talkSPORT. The 33-year-old signed a new deal with the Catalan giants last year, but has since found himself on the periphery and could be sold as a result.

Palmeiras defender Yerry Mina is reportedly a target for Barcelona, and his arrival at the Nou Camp is likely to see Mascherano shown the exit door. PSG could make a move for the former Liverpool midfielder, but they’re believed to have competition from a number a MLS clubs.

Mascherano’s deal with Barcelona still has two years to run, but he’s no longer commanding a starting place and could leave the club a lot sooner than 2019. The veteran has made six La Liga appearances for Ernesto Valverde’s side this season, but has been an unused substitute on four occasions.

He’s currently valued at £7m which PSG shouldn’t have a problem with, but his advancing age might give them pause for thought. Mascherano joined Barcelona from Liverpool in 2010, costing £18m. He’s played for River Plate, Corinthians and West Ham United, while representing the Argentina national team on 139 occasions.

Paris Saint-Germain currently have Thiago Silva, Marquinhos and Presnel Kimpembe as their options in central defence, but Mascherano would provide good cover, especially given his experience. The 33-year-old has won four La Liga titles and two Champions Leagues with Barca.