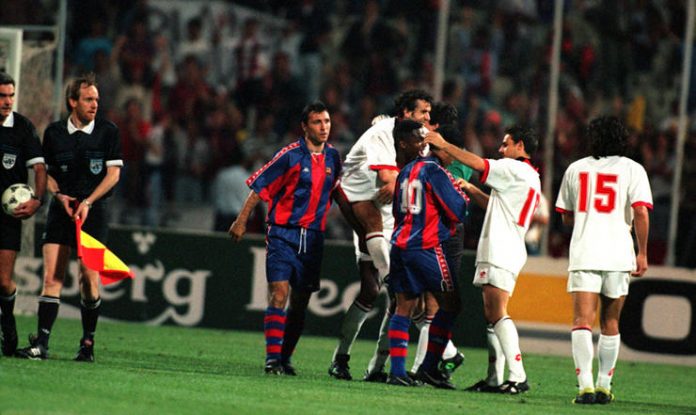 On this day in 1970, England legend Bobby Moore was accused of theft in Bogota, Colombia.

England were in the South American nation for a pre-World Cup tour. Moore, then the captain of the national team, was accused of stealing a bracelet from a jewellery shop located in the hotel in which the England squad was staying.

As a result, the former West Ham United centre back was detained in Colombia for four days. The bizarre episode incited an international incident that required diplomacy from the then British Prime Minister Harold Wilson. A few days later, Moore was unconditionally released and he was able to join his compatriots in Mexico for the FIFA World Cup.

The Colombian authorities came to the conclusion that Moore was innocent of any wrongdoing.

Played at the Olympic Stadium, the Italians were 2-0 up at half time courtesy of a brace from Daniele Massaro. Second half goals from Dejan Savicevic and Marcel Desailly put the game completely out of reach for the Johan Cruyff managed Barcelona side.