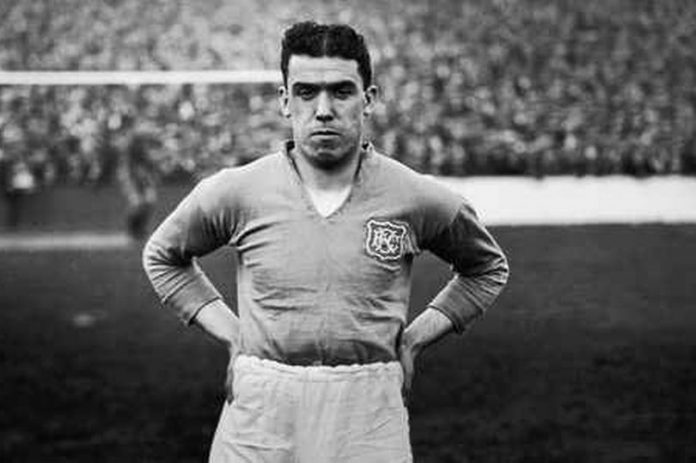 On this day in 1980, Everton legend Dixie Dean sadly passed away from a heart-attack in his spiritual home Goodison Park while watching the Toffees play Liverpool.

Born in Birkenhead in Cheshire, Dean began his career with Tranmere Rovers before joining Everton in 1925. Dean had attended a league game at Goodison Park with his father when he was eight years old and was believed to be an Everton fan from a very early age. He was so excited by the club’s interest in him, he ran the four kilometres distance from his home to the riverside to meet club secretary Thomas McIntosh.

In the 1927-28 season, Dean aged just 21, broke George Camsell’s record of 59 goals in a single league campaign by scoring 60. The incredible record still stands to this day.

The England international stayed at Everton for 12 years winning two First Division titles and an FA Cup among other trophies before departing for Notts County. He scored an unbelievable 395 goals in 447 appearances for the Toffees.

In 1980, aged 73, Dean attended a football match at Goodison after several years. It was the Merseyside Derby and the air was electric. Unfortunately, the occasion was overshadowed by his sad demise from a heart-attack.

On this day in 1975, Aston Villa beat Norwich City 1-0 at Wembley to win the League Cup.

Played in front of 95,946 fans, Villa hero Ray Graydon scored the only goal of the game to win the Cup for his side. To this day this remains the only major domestic Cup final in English football where neither of the two teams contesting for the trophy belonged in the First Division. However, both Villa and Norwich were promoted at the end of the campaign.