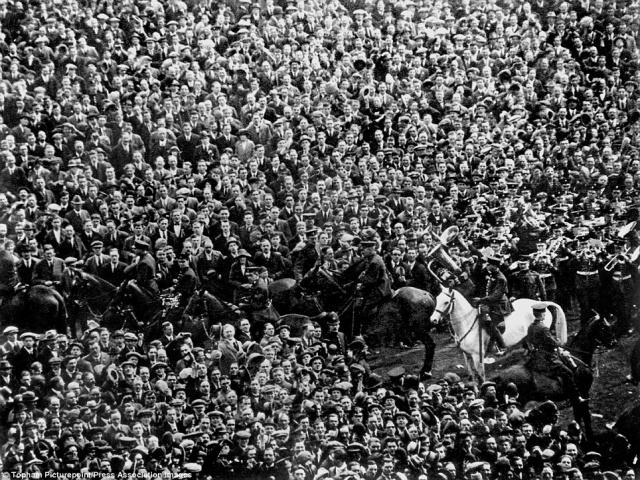 On this day in 1923, Bolton Wanderers beat West Ham United 2-0 in the FA Cup final in what was the first ever game at the Wembley Stadium in London.

The official attendance for the game was 126,047 but as many as 200,000 fans were believed to have gained access inside the stadium to witness this historic game. The excess number of spectators resulted in many fans being pushed on to the pitch prior to the game. This required mounted police to restore order before the match kicked off.

An iconic image from the match features constable George Scorey mounted on his grey horse Billie amidst a sea of fans. Billie appeared white on film which helped dub the game as the White Horse Final.

Bolton took the lead in the second minute through David Jack before Jack Smith added another to give the Wanderers a comfortable 2-0 victory.

On this day in 1973, Sir Bobby Charlton played his 606th and last league match for Manchester United.

Sir Bobby’s phenomenal career ended disappointingly with a 1-0 loss against Chelsea at Stamford Bridge as United finished just one spot above relegation. The England legend still finished as the top scorer in the league for United that season with six goals.

During his time in Manchester, Sir Bobby won three league titles, an FA Cup and a European Cup among other honours. His heroics for both club and country also won him the prestigious Ballon d’Or award in 1966.