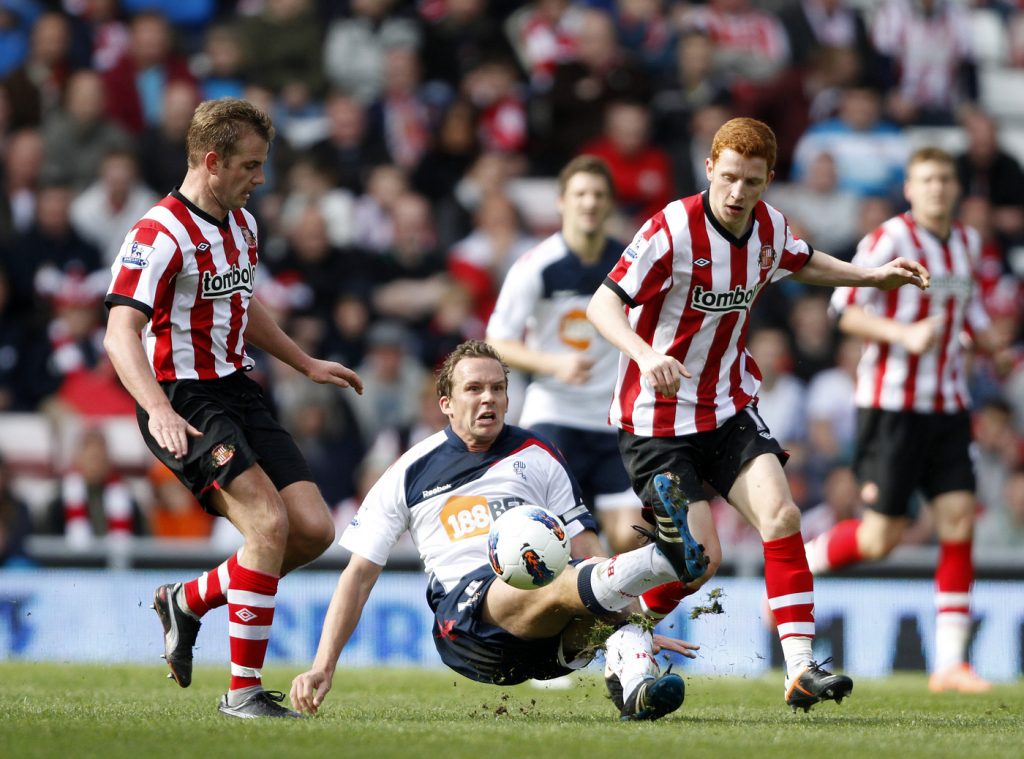 As it’s the international break, both the Premier League and Championship will grind to a halt for the next 10 days as players jet off worldwide to meet up with their international colleagues.

Leagues One and Two will come into the spotlight domestically as a result, and we’re going to use the time to take a look at two former top-flight teams vying to make their way back to the summit, starting with promotion this season.

Sunderland and Bolton Wanderers spent a combined 29 seasons in the Premier League since its 1992 inception. However, since their respective relegations, they have both fallen dramatically from grace at an alarming rate.

Relegated to the Championship in 2017 with David Moyes as manager, the Black Cats were in turmoil off the pitch. Moyes left, then owner Ellis Short wanted to sell the club but was struggling to find a buyer, and things weren’t going well on the pitch either.

A season that started with Sunderland as promotion favourites saw them finish rock bottom of the league. The defeat against Burton Albion at the Stadium of Light confirmed back-to-back relegations, and they went down to League One for just the second time in the club’s 130+ year history.

Since then, it’s been so close but yet so far on too many occasions. Losing the play-off final in the 94th minute to Charlton Athletic prevented the club from making it back into the Championship, as did missing out on a play-off spot entirely last season when the league was decided on a points-per-game basis due to COVID-19.

Add an EFL Trophy final defeat on penalties to Portsmouth into the mix, and it’s been a rotten few years for Sunderland fans, but now things are changing for the better.

Lee Johnson – their fifth manager in four years – arrived in December 2020 to take over from Phil Parkinson with the club floundering in mid-table. Three months on, they have only lost two games in all competitions, currently being undefeated since February 9.

Johnson’s Black Cats have surged up the League One table and currently sit third, just two points off Peterborough United and only five away from top of the table Hull City, another former top-flight club.

Encouragingly, at the time of writing, Sunderland also have games-in-hand on the two teams above them, so automatic promotion to the Championship could be on the cards, and their fans may not have to endure another fear-inducing play-off campaign.

However, even if they do, they have now at least lifted the so-called ‘Wembley curse’, having recently picked up this year’s EFL Trophy with a 1-0 victory over Tranmere Rovers at the national stadium.

Sunderland have recently changed ownership as Kyril Louis-Dreyfus has come in and taken over from Stewart Donald and his accomplice Charlie Methven, both well-known characters from the Netflix series ‘Sunderland Til I Die’.

Louis-Dreyfus is the youngest club owner in the Football League at 24 and is the son of former Marseille owner Robert Louis-Dreyfus.

With 11 games left of the regular season for the ‘Mackems’, a mixed bag of opponents are to come. Both Peterborough and Hull are on the horizon in April, along with relegation-threatened Wigan Athletic.

One thing is for sure – we won’t be hearing Methven screaming ‘CHANGE IT!’ on our TV screens again anytime soon.

Bolton’s fall from grace has actually been worse than Sunderland’s but has taken longer to really bottom out.

As Sergio Aguero scored THAT title-winning goal for Manchester City on the final day of the 2011/12 Premier League season, the Wanderers were relegated following a 2-2 draw away at Stoke City.

Owen Coyle’s side were hard done by on the day as both of Stoke’s goals were contentious to say the least, but some might argue that if they had survived, it would’ve just have delayed the inevitable.

Finding themselves in the Championship for the first time in over 10 years, Coyle got off to a poor start and was replaced by Dougie Freedman.

Bolton missed out on a play-off spot on the final day of the season and, from then onwards, suffered a slow decline down the league table before being relegated to League One in May 2016 amidst the start of a whole world of issues off the pitch.

Transfer embargoes on and off, the side gained promotion at the first time of asking and miraculously survived on the final day of the 2017/18 season with an iconic winning goal by Aaron Wilbraham, who was then not offered a new contract.

Players weren’t being paid, owner Ken Anderson wasn’t paying the bills, and the Trotters limped back down to League One the following season before things took a very sour turn.

Along with local neighbours Bury, it looked for all the world like they would go bust having entered into administration.

Chairwoman Sharon Brittan saved the club with her Football Ventures consortium with literally minutes to spare, but it was too late in terms of even mounting a survival bid.

Last season, Bolton won just five games and went down to League Two for just the second time in the club’s history.

New manager Ian Evatt has come in this season, and despite a poor start to the season, the club are in with a good chance of starting its re-building process with a promotion.

The Whites sat 19th in the league as recently as February but have – at the time of writing – gone on an impressive 12 game unbeaten run and moved up to fifth in the League Two table, just two points behind Forest Green Rovers in the last automatic promotion spot.

Evatt’s side will take on Forest Green away from home live on Sky Sports this coming Saturday and could move into the automatic spots for the very first time this season if they come away with all three points.

Only Morecambe and Bradford City have been able to stop them from doing so over the last 12 games, and they hold the record of the longest unbeaten run in the country at the moment.

Goalscorer Eoin Doyle has become the first player to net 15 goals in one season at the club for close to 20 years, a remarkable statistic given the calibre of players that have hailed the turf of the University of Bolton Stadium over the years include Nicolas Anelka and Jay-Jay Okocha to name just a couple.

Bolton have 10 games left of their regular season. While they have an incredibly tough run-in, including games against fellow contenders Newport County and Morecambe, many are tipping the Wanderers for promotion back to League One at the end of this campaign.

Evatt will know the work needed to be done by his side to earn that, but as stated at the ‘UNIBOL’ on matchdays when the players walk out, ‘This is only the Beginning’.