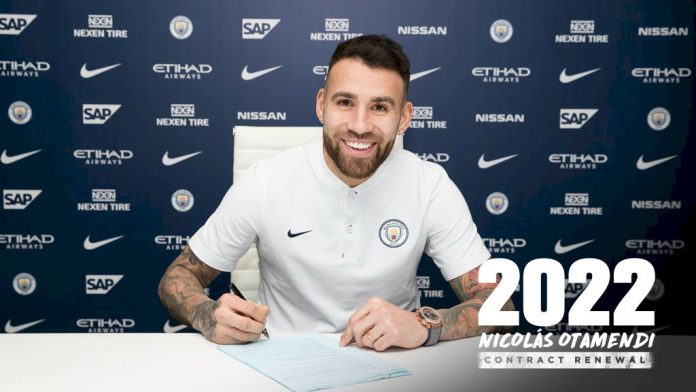 Manchester City defender Nicolas Otamendi has signed a new deal with the club.

The agreement has been confirmed on the club’s official website. Otamendi will stay at the club until 2022 now.

The 29-year-old has been exceptional for Manchester City over the last year and it is no surprise that the league leaders are looking to secure his future at the club.

Otamendi’s style of play has helped him settle into Guardiola’s system. The Argentine is calm and composed on the ball and he has helped his side build from the back. He has formed a formidable partnership at the back with John Stones.

The Argentine’s form has helped City cope in the absence of Vincent Kompany. The Belgian has been in and out of the squad due to injuries.

Furthermore, the 29-year-old has popped up with crucial goals time and again.

Otamendi seemed delighted to have sealed the agreement with Manchester City. The Argentine revealed that he is very happy at the club and that he enjoys living in Manchester.

He said: “I’ve enjoyed my time at City since the first day I arrived and I’m really happy to have extended my stay here by a couple more years. My only aim is to help the team and give all I can for this Club. I am learning every day under Pep and enjoying my football and I feel I can still improve as a player. I’m a family man who enjoys being at home and I love living in Manchester, you sort of get hooked by it. It’s a very beautiful city and I’m very happy here.”