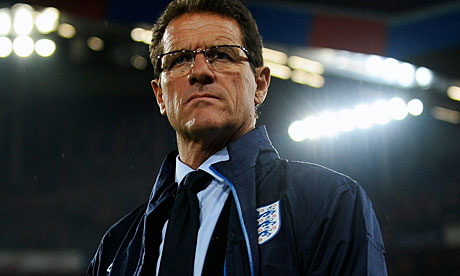 Next England Manager Odds Provide A Great Bet And It Isn’t Harry Redknapp.

England Manager Fabio Capello recently announced that he would be leaving his job after Euro 2012 and that has led to an increased interest in the Next England Manager Odds, which were under intense speculation after England’s flop at the World Cup.

We have two more years of Fabio Capello at the most but it could be less if England mess up at any stage during the qualifying matches that will take place over the next twelve months or so. It is thought by most bookies that it will be Spurs manager Harry Redknapp will replace Capello and he deserves a shot at the job having proved himself more than just a wheeler dealer at Spurs. He would be a popular choice but the FA certainly aren’t crowd pleasers (they appointed Steve McLaren after all) and his legal issues may turn the FA off.

The FA may have already made their mind up about Stuart Pearce, he has been groomed for years to get the job having worked as England Under 21 boss (so he has already managed several players who would be in his senior side) and he has also been part of Fabio Capello’s coaching set up at senior level. He is available at very big odds relative to his chances of getting the job and he should be backed to become the Next England Manager.

Other possibles include Roy Hodgson, Martin O’Neill and Sam Allardyce but none make the appeal of the front two in the betting. To make your betting go a bit further it is best to use some of the Free Bets that are on offer.