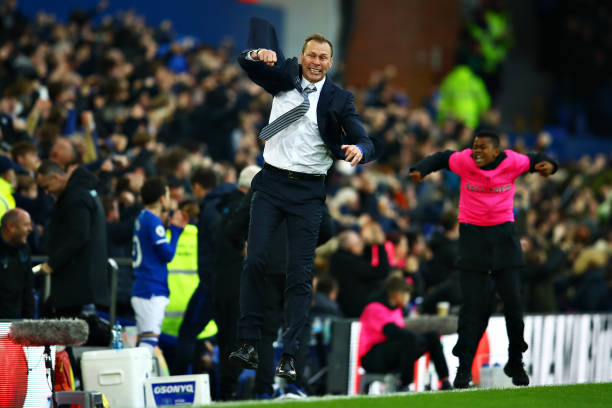 Everton picked up their fifth Premier League victory of the campaign at the expense of Chelsea at Goodison Park yesterday, blowing away Frank Lampard’s side in a 3-1 win and ending a run of three straight defeats.

It was the Toffees’ first game since Marco Silva was sacked on Thursday, and interim boss Duncan Ferguson was a huge inspiration on the touchline.

It was a different Everton against Chelsea, with the players putting in, arguably, the team’s best performance of the season thus far.

Richarlison opened the scoring five minutes into the game through a brilliant header from Djibril Sidibe’s cross, and Dominic Calvert-Lewin doubled Everton’s lead four minutes after half-time after taking advantage of Chelsea’s lack of control at the back.

Mateo Kovacic halved the deficit three minutes later, but the hosts had the last laugh and put the game to bed six minutes from time as DCL was the fastest to react to a loose ball.

Liverpool legend Jamie Carragher and former Everton star Micheal Ball were impressed with how the side played under Ferguson, and here is how they reacted to the victory on Twitter:

I can’t help but love these Big Dunc celebrations!!! #EVECHE

As a Red now I can’t deny I was pleased to see Everton win just for Duncan Ferguson! Celebrations were great to see & that is Everton football, aggressive, powerful & using the crowd!! #EVECHE

Duncan factor is back! #UTFT

The 47-year-old has been on Everton’s coaching staff under each of the last four managers (Roberto Martinez, Ronald Koeman, Sam Allardyce and Marco Silva), and if he remains in charge, it will be interesting to see if his charisma can get the job done when they visit Manchester United next Sunday and against Leicester City in the League Cup three days later.