As per the latest report from Portugal, Benfica President, Luis Filipe Vieira, is set to arrive in England today to discuss the sale of Lindelof to Manchester United. The Portuguese club will hold out for a fee of €45 million, excluding add-ons.

Lindelof has been linked with a move to Old Trafford for a while now. The Swedish defender has attracted a lot of attention with his mature displays for his country and in the Champions League. Recently, Zlatan Ibrahimović also praised his ability and claimed that Lindelof is ready to play for a big club.

Manchester United are in desperate need of a centre-back. Apart from Eric Bailly, none of the centre-backs at Old Trafford have managed to impress this season and United have suffered at the back because of it.

It will be interesting to see if the Red Devils agree to meet Benfica’s demands for the player now. There is no doubt that Lindelof is a talented player, but the €45 million valuation is perhaps a bit too much at this stage.

In other news, Mourinho is very interested in signing James Rodriguez during the January transfer window. 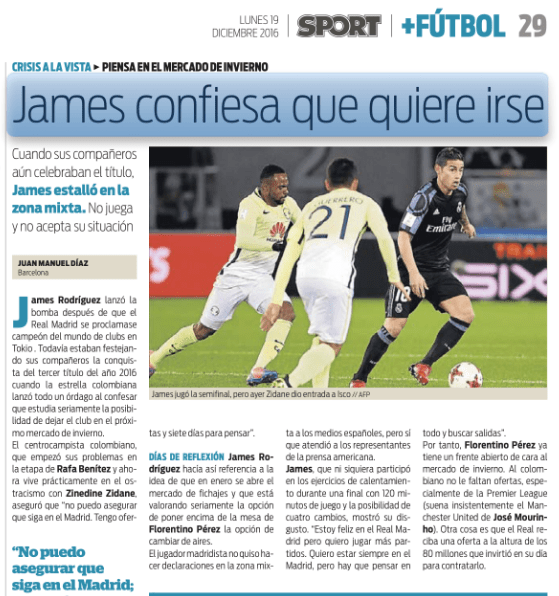 Spanish newspaper Sport are claiming that Mourinho wants to sign the unsettled Real Madrid star, and Los Blancos will look to recoup as much as possible of the €80 million (£67 million) they paid for him.

Rodriguez is unhappy with the lack of regular first team football at Santiago Bernabeu and recently confirmed that he has offers from other clubs. The Colombian additionally revealed that he has a week to decide on his future. The former Monaco midfielder has struggled to impress Zidane and has been used as a backup option over the last 16 months.

Although he is a very good player, Manchester United’s interest in him makes very little sense. The Red Devils already have Mata, Mkhitaryan, Herrera, Pogba, Rooney, Martial, Rashford, and Depay for that position. It would be more beneficial for them to invest in another position.

It seems that the Catalan newspaper is doing their best to unsettle James even more. Real Madrid are in the title race and will fight for the Champions League, as well. There is no way they will sanction the sale of Rodriguez midway through the season, even if United were interested.