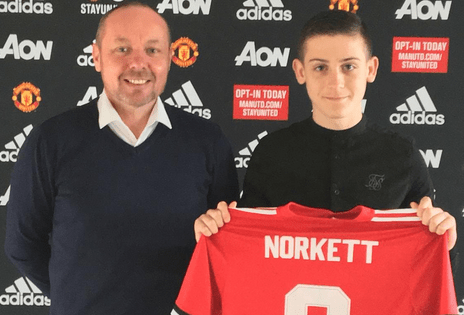 Manchester United have signed striker Manni Norkett, a 13-year-old described by the Newark Advertiser as one of the ‘brightest talents in the youth game’.

Norkett played competitive youth football for Collingham, Newark Town, RHP Colts and Birchwood Colts, but now he’s at one of the biggest clubs in the world.

The teenager hails from North Muskham and was subject to offers from 15 professional clubs, including soon-to-be Premier League side Wolverhampton Wanderers and Everton. He previously trained with Deano’s Pro Soccer Academy, run by ex-professional Dean Walling.

Norkett also developed at Manchester City, Grimsby Town and Sheffield United’s academies, but now he’s in a United set-up which has blooded through the likes of Jesse Lingard, Marcus Rashford and Scott McTominay in recent years. He’ll hope to rise through the ranks to the first-team like they did.

The striker has reportedly turned out for United in the u14 LA Galaxy Cup in Los Angeles, netting in every game played –  LA Galaxy Real So Cal, Real Salt Lake and San Diego Surf – so he’s making a good impression. A lot has been tipped of the youngster, who believes United are the best team for a player of his ability.

“I am really excited. I wanted to sign for Manchester United because I think they will suit my style of play more than other teams. I like to run and play with a bit more freedom going forward. Football is just football for me and I love everything about it, but I like to score as many goals as I can.

“The coaches (at Manchester United) are different than what I thought. It has been really great there so far. I want to be selected for England youth teams later this year, so I will be working hard towards that.”