Manchester United are strong favourites now to land Fiorentina’s highly rated wing-back Juan Cuadrado after reports emerging from Catalan newspaper Sport that Barcelona, the other potential contender, have almost admitted defeat in the race to sign him.

It is swinging like a pendulum forcing us to believe that Catalan newspapers probably haven’t got a clue of what’s going on. After covering a big story yesterday, where they spoke about Barcelona’s willingness to make counter bid for the Colombian, who is seen as a like-for-like replacement for Dani Alves; they now claim that Barcelona aren’t willing to compete with United and that Alves staying at Barcelona now makes it less of a priority.

Cuadrado himself wants to join Barca (he recently signed few Barcelona shirts), but the club aren’t willing to counter United’s offer and match Fiorentina’s asking fee, which is reported to be around €50m. 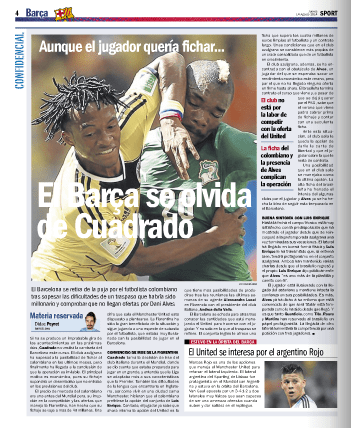 Mundo Deportivo reported yesterday that Chelsea are showing a keen interest in Cuadrado as well. They have sold Marko Marin on loan to Fiorentina and in the process developed a good rapport, which might help them do a business.

In any case, that is one hell of a bizarre suggestion, keeping in mind, Chelsea have a strong defensive set-up and hardly need any new addition on that department.

Fiorentina are keen to solve Cuadrado’s future within next week as they need to find a suitable replacement, should he depart.

The pendulum has swung in the favour of Manchester United as of now, but you never know with Catalan press and transfer window, tomorrow we might be a different story altogether.