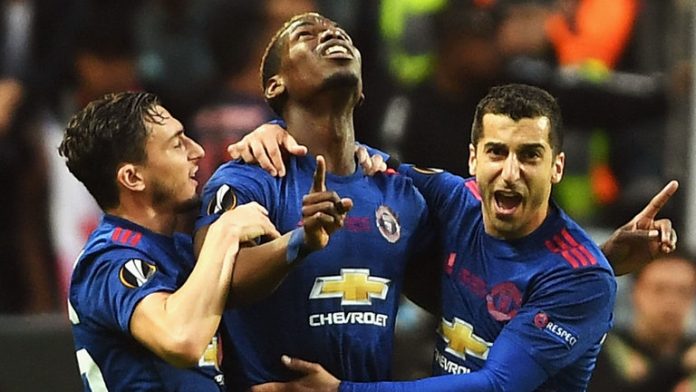 England’s five Champions League representatives are all still in with a chance of finishing top of their respective groups in Europe’s premier football competition.

Manchester United, Liverpool, Manchester City and Tottenham Hotspur lead their groups after four games, while Chelsea are just a point behind Roma heading into the fifth round of matches.

United visit Basel on Wednesday and are priced at Evens to make it five wins out of five in Group A. Paul Pogba was impressive on his return from injury against Newcastle United over the weekend and could be worth an interest at 7/1 to score the opener in Switzerland.

While United look sure to go through to the knockout stage, Chelsea’s fate is less certain.

The Blues face Qarabag FK in Azerbaijan needing a victory to qualify for the last 16, but a draw or a defeat could set up a nervy last match against Atletico Madrid.

Chelsea hold a four point lead over Altetico, but with Diego Simeone’s side rated as 20/21 favourites to beat Roma on the same night the Blues will be keen to avoid any slip-ups.

Liverpool currently lead Group E by a point from Sevilla, but Tuesday’s trip to face the La Liga side will be a stern examination of their Champions League credentials.

Jurgen Klopp’s side are 29/20 to win the game, with home team priced at 9/5 and the draw on offer at 13/5. The two sides drew 2-2 at Anfield and the Reds would probably be happy to settle for a point with a home game against Spartak Moscow still to come.

Manchester City have won all four games in Group F and a victory over Feyenoord at the Etihad Stadium should be enough to secure top spot.

City won 4-0 in Holland back in September and are priced at 8/1 to repeat the feat on Tuesday.

Tottenham’s 3-1 victory over Real Madrid at the end of October put them in pole position to finish top of Group H.

Spurs head to Borussia Dortmund with a three point lead over Madrid, but the Bundesliga side need a victory to have any chance of qualifying for the next stage and will be tough opponents.

Madrid can guarantee their place in the last 16 of the Champions League with a victory at APOEL Nicosia.

The European champions are 9/2 second favourites to win the competition for the third year running, and although APOEL have drawn twice with Dortmund during the group stage the visitors should prove too strong and odds of 13/2 for a 2-0 victory look inviting.

Cristiano Ronaldo has struggled for goals in La Liga, but he is still on form in Europe with six goals from the four group stage games so far and is priced at 41/20 to score the opener in Cyprus.

Besiktas need just a point to secure top spot, but Porto desperately need a win to ease the pressure on their final group game against Monaco in December.

Porto are only two points in front of RB Leipzig and look worth an interest at odds of 29/20 to win in Turkey.

Juventus against Barcelona is the highlight of Wednesday’s fixtures, with the Serie A side still harbouring genuine hopes of claiming top spot in Group D.

Barca won 3-0 at the Nou Camp back in September, but Juve will be gunning for revenge and look tempting at odds of 19/10 to join the Spanish side on 10 points.

Juve knocked Barcelona out of last season’s Champions League in the last eight and can be backed at 28/1 to repeat the 3-0 scoreline they recorded in the home leg of that tie.