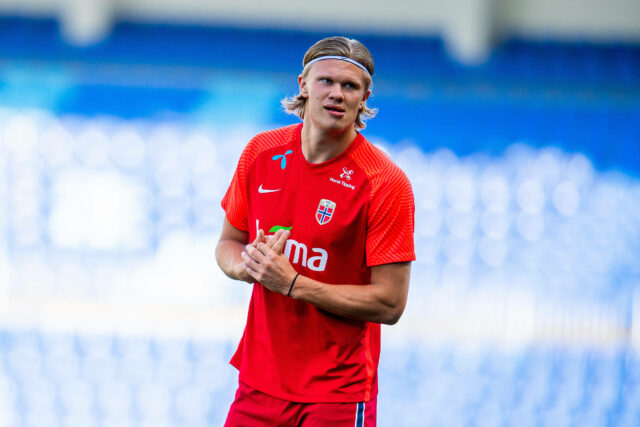 Manchester City are reportedly interested in improving their attacking options at the end of this season and they have identified the Borussia Dortmund striker Erling Haaland as their first-choice target.

According to a report from David Ornstein from the Athletic, the Premier League champions are determined to push hard for the Norwegian international’s services in the summer. The Premier League giants are set to hold meetings with the striker’s representatives over the next few months.
Haaland has established himself as one of the best strikers in the world and it is no surprise that the Premier League giants are keen on securing his signature.
The 21-year-old has been linked with the likes of Barcelona, Bayern Munich, Paris Saint-Germain and Real Madrid as well.
It will be interesting to see where the Norwegian international ends up next summer.
A clause in his contract allows his suitors to sign the player for a more reasonable amount at the end of this season.
The report from Athletic adds that Manchester United retain an interest in Haaland but the player might not be too keen on a move to Old Trafford.
Athletic believe that Manchester City could move for the likes of Alexander Isak or Dusan Vlahovic if they fail to sign the Borussia Dortmund striker in the summer.
Alternatively, the Premier League giants could resurrect a move for the Tottenham Hotspur striker Harry Kane who was a target for them at the start of this season.
Manchester City failed with a mega bid to sign the England international in the summer and it remains to be seen whether they decide to return for the Tottenham star in the summer once again.
Manchester City have a formidable squad at their disposal but Pep Guardiola needs to sign a recognised goal scorer.
Someone like Haaland could be the final piece of the puzzle for Manchester City and the Norwegian would be the ideal long term replacement for club legend Sergio Aguero who left at the start of this season.
Join our Telegram channel to stay up to date on the latest in marketing