Colombian wing back Juan Cuadrado has had a terrific World Cup campaign in Brazil, as a result of which, his market value has inflated to a huge extent. Barcelona are heavily interested in the defender as they want to replace him for Dani Alves. Hence, we find almost every day Catalan newspapers covering a story on Cuadrado.

Earlier in the day, we covered that Cuadrado’s compatriot, James Rodriguez, who has joined Real Madrid in the summer, had been advising him to join Barcelona. Manchester United are also reportedly interested in him while Sport claim today that Premier League champions Manchester City have also joined the race as well.

According to their information, City have tabled up a €35m offer which they feel should be enough to lure the Colombian switching colours this summer. Fiorentina in fact are happy with the offer, especially considering that there’s some City players that could be used in a swap deal like Javi Garcia. 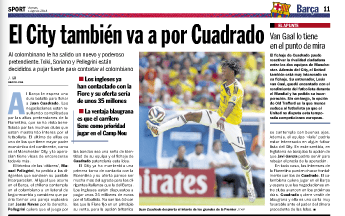 And what about Manchester United? Sport claim that the Red Devils are the least preferred option for the wing-back, since he won’t be play in Europe next season. However, expect a change of tone tomorrow/day after tomorrow/within this week from Sport, if Barcelona come up with a better offer for him.