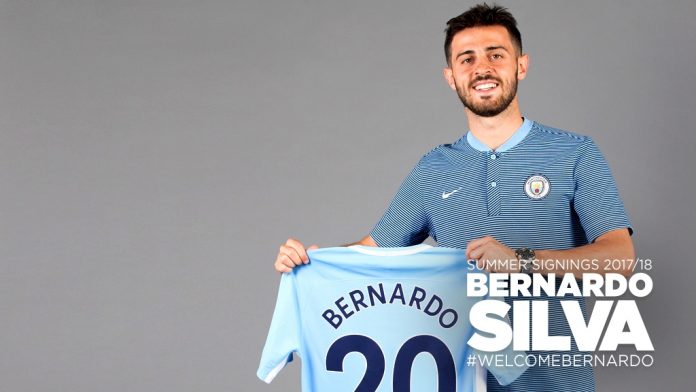 Manchester City have agreed on a deal to sign the highly talented Monaco winger Bernardo Silva.

The Premier League giants announced their first summer signing this evening and the Portuguese star will join the Etihad outfit on the 1st of July.

Telegraph are reporting that Manchester City will pay £43million for the 22-year-old.

Silva has had a spectacular season with Monaco this year and was being linked with several Premier League clubs. Manchester City have moved swiftly to secure the winger’s services.

The 22-year-old winger has scored 11 goals for Monaco this season and has helped them win the Ligue 1 title and reach the semi-finals of the Champions League.

The Portuguese player began his career at Benfica and then went on to make his mark in the Under 19 European Championships where he was named in the top 10 talents by UEFA reporters.

Silva joined Monaco on loan in 2014 and the deal was made permanent six months later.

The winger will wear the number 20 shirt at Manchester City. Silva expressed his delight after completing the transfer. He said:

It feels great. To be honest I’m now at one of the best teams in the world. To be part of this club and to have this opportunity is great. I’m very happy to be part of Manchester City’s team and I look forward to trying to do my best to help the team reach their goals. If not the best coach in the world, he is one of the best. Of course when you have the opportunity of being trained by Guardiola, you don’t say no. As we all know, what he did in Barcelona and Bayern Munich was amazing and we expect also here that he will win titles. It’s great to be working with him and to have this opportunity.