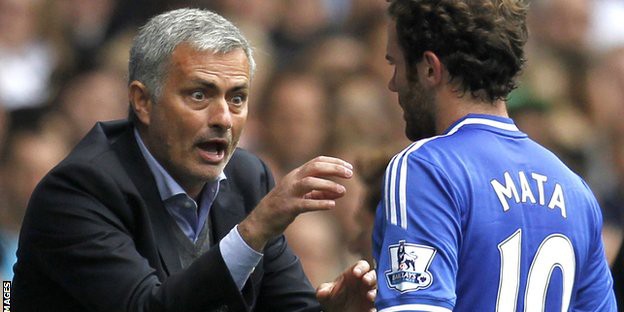 Mata joined the Old Trafford outfit from Chelsea in a £37 million deal in January 2014 but is widely expected to leave the club following the appointment of his former Blues’ boss Jose Mourinho last month.

The Spanish International spent four dismal months under Mourinho after failing to establish himself as a regular starter and was often enforced to play out of his favored position with the Portuguese coach suggesting him to adapt to a wider role with defensive duties since he preferred Oscar to play the role of a playmaker in his Chelsea side that would go on to win the Premier League title next season.

Despite being named Chelsea’s player of the season for the previous two campaigns, Mourinho let Mata leave the London-based club two years ago before branding the 27-year-old a ‘luxury player’. The two personalities share a dreadful relationship and the potential signing of Dortmund playmaker Henrikh Mkhitaryan all but suggests that Mata will be on the move once again.

Mata is thought to be attracting interest from a host of Premier League clubs but Everton remain optimistic about acquiring the Man Utd midfielder’s services this summer due to his previous association with the Toffees’ new boss Ronald Koeman.

The Real Madrid youth product worked under Koeman during the pair’s spell at Valencia which won the 2008 Copa Del Rey title but the Dutch coach was eventually sacked after just six months in-charge of the Spanish side.

Everton reportedly have a £100 million transfer budget in the hope of securing Champions League football and are said to be closing in on Zenit midfielder Axel Witsel for around £30 million.

Koeman has already laid the groundwork for his tenure at Goodison Park by signing Netherland’s first choice goalkeeper Maarten Stekelenburg to replace the club’s long-serving stopper Tim Howard, who joined the MLS club Colorado Rapids at the end of last season.

The Telegraph report that the Merseyside club have tabled a £20 million bid but Man Utd are poised to hold out for at least £25 million for Mata, who has scored on 21 occasions in 86 league appearances for the Red Devils.