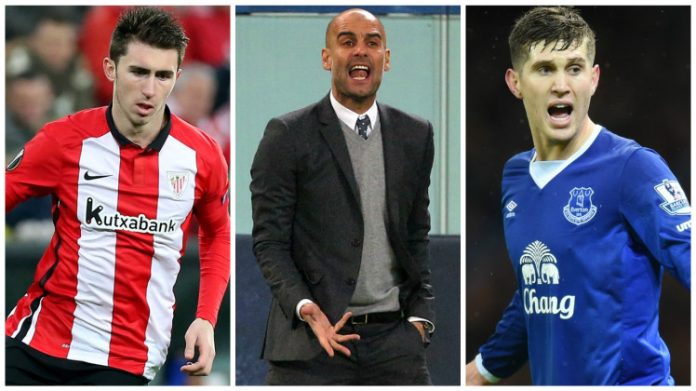 Manchester City have stepped up their efforts to sign Everton defender John Stones after Aymeric Laporte’s decision to snub the move to the Premier League.

The Blues were reportedly closing in on the French International but were tentative about Bilbao’s £40 million asking price.

Laporte, who is considered as one of the best young prospect in Europe, signed a new four-year contract extension to stay at the Spanish club and end speculations about his future. In a latest interview, the 22-year-old confirmed that he had concrete offers from a host of European clubs.

“Several clubs were interested in me, with some very exciting and attractive projects,” Laporte told Bilbao’s official website.

“In the end you have to make decisions and I made mine. I hope everything goes well; I thank the clubs that were interested in me because it means I’ve been doing the right things.”

Laporte now has a €65 million release clause included his newly signed contract with Bilbao which will rise to €70m from 2018, all but ending Man City’s pursuit to sign the French defender.

The Premier League giants, meanwhile, hope to sign Stones after his involvement in Euro 2016. The 22-year-old has established himself as one of the best centre back in the league following his two impressive campaigns with Everton.

The Merseyside club remain reluctant to sell the English defender but will find it difficult to turn down offers around £40 million.

Man Utd have also been strongly linked to sign Stones this summer, but the Red Devils have instead landed Ivory Coast International Eric Bailly from Villarreal earlier this month.

Newly appointed Man City boss Pep Guardiola is desperate to bolster his defensive options with club captain Vincent Kompany out until October, leaving Nicolas Otamendi and Eliaquim Mangala as the only first team centre backs for the Blues.