This evening sees the first-ever league meeting between Liverpool and Bournemouth as the two sides conclude matchday 2 on Monday night football.

Liverpool started their season with a 1-0 victory at Stoke City thanks to a late Philippe Coutinho strike and have the opportunity to become one of only four teams with maximum points after two games.

Bournemouth were also involved in a 1-0 on the opening weekend but Eddie Howe’s side were beaten at home to Aston Villa. Sunderland are the only team to have lost both of their opening two fixtures so far.

Daniel Sturridge is out until September. Christian Benteke made a very quiet debut last weekend, not threatening the Stoke goal as Liverpool’s sole striker.

Joe Allen is sidelined with a hamstring injury for at least another week. Jordan Henderson and James Milner started in the centre last weekend, whilst Emre Can made an appearance from the substitutes’ bench.

A groin injury is keeping midfielder Harry Arter out but he is Bournemouth’s only absentee for Monday night football. 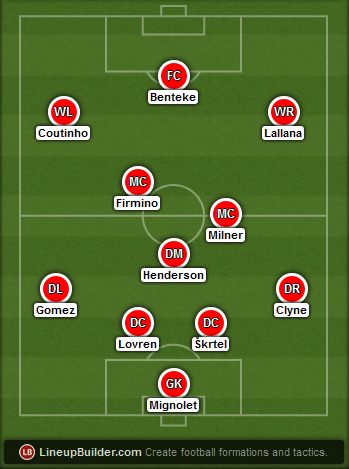 This back four was comfortable in keeping a clean sheet at Stoke to start their season and I don’t expect any changes amongst them. Joe Gomez did concede possession too much for one’s liking but I expect him to get a second chance ahead of Alberto Moreno. Brendan Rodgers has said that Roberto Firmino is closing in on his first Liverpool start – perhaps this could be it. I’m not entirely sure where he fits in in the 4-3-3 system as a number 10 but he’s certainly more productive down the middle than out wide. Philippe Coutinho and Adam Lallana out wide to try create some chances for Christian Benteke. 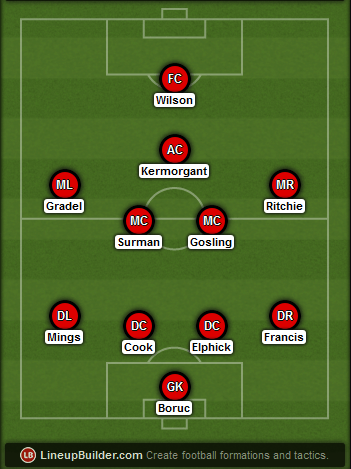 Summer signing Tyrone Mings could make his debut at left-back this evening as the only change in a defence that were beaten by Rudy Gestede’s header in their first-ever Premier League game. Dan Gosling has scored a winner a Merseyside derby FA Cup win over Liverpool in the past, whilst there is also creativity down both wings in this Bournemouth side. Not the biggest fan of Yann Kermorgant myself, but many are expecting good things from striker Callum Wilson this season.

Philippe Coutinho vs Simon Francis
Bournemouth’s right-back had a solid opener against Aston Villa but now faces one of the trickiest players in the Premier League. Philippe Coutinho is a playmaker who likes to pick up the ball from deep and run at defences. He cuts inside to either create chances of shoot from outside the penalty area, for which he is one of the best at in this division. Simon Francis cannot afford to be too naïve and give the Brazilian time and space or Bournemouth will be punished.

Adam Lallana vs Tyrone Mings
If Tyrone Mings does make his debut tonight the left-back will have a busy game trying to keep up with Adam Lallana who loves to drift inside and all across that midfield. It could free up space for Nathaniel Clyne who was good at getting forward for Southampton from right-back last season. Lallana will be looking to create chances for striker Christian Benteke, as well as Coutinho, and has a good goalscoring record himself.

Christian Benteke vs Tommy Elphick
Although Christian Benteke made a quiet debut for Liverpool we can’t expect the £32.5 million signing to be like that every week. Bournemouth conceded a headed goal last weekend and the Belgian striker is good in the air, plus the whole of the Liverpool midfield can provide a good cross from out wide.

0 – Only Bournemouth and Sunderland are without a single point so far this season ahead of Monday’s game.

1 – This is the first-ever league meeting between these two sides.

10 – Simon Mignolet has kept more clean sheets than any other Premier League goalkeeper in 2015.