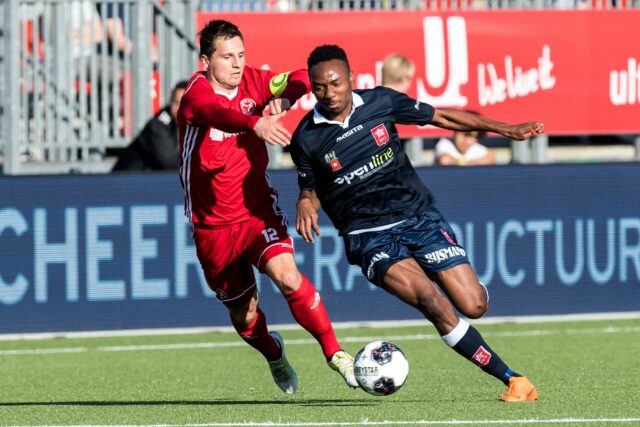 Leeds United are interested in signing Kelechi Nwakali, according to The Atheltic.

The Whites are close to signing Junior Firpo from Barcelona, but they also seem to be working on landing other targets.

Nwakali has also been watched by Watford. The newly-promoted Premier League club are interested in Aberdeen’s Lewis Ferguson, but talks have stalled.

They have now turned their attention to the Nigerian midfielder who has one year left on his contract.

The 23-year-old plays for Huesca after leaving Arsenal two seasons ago. He wants another chance to impress in England, and a move to Leeds or Watford cannot be completely ruled out.

Phil Hay of The Athletic claimed back in March that Leeds could sign a midfielder this summer.

Kalvin Phillips has established himself as one of the finest central defensive midfielders in the Premier League, but Leeds struggle without him.

Robin Koch, Pascal Struijk, Diego Llorente, Jamie Shackleton and Mateusz Klich have tried to fill his role, But Leeds need someone who can be a reliable back-up option.

Given Nwakali’s contract situation, Leeds can expect to sign him on a cheap deal.

However, he didn’t play much last season. Despite his obvious talent, his signing could be a big gamble.

Marcelo Bielsa is a world-class manager and could improve the player rapidly. He is a creative midfielder and looks like an intriguing prospect.