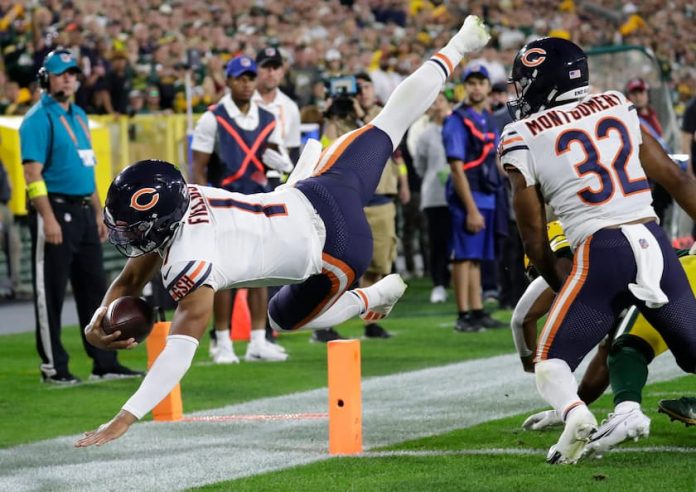 Justin Fields has backtracked on comments he made regarding Bears fans following their tough loss against the Packers on Sunday.

The Bears QB had a rough Sunday throwing for only 70 yards and running for 20 in a 27-10 loss to the Packers. This loss meant he was 0-3 against the Packers throughout his career.

His night then took a turn for the worse after comments he made to a question from the media about if the loss hurt more because of how much Bears fans want to turn around the rivalry since Rodgers became the Packers starter.

Fields went on to answer saying: “Yeah, it hurts more in the locker room than the Bears fans. At the end of the day, they aren’t putting in any work.

“I see the guys in the locker room every day. I see how much work they put in. Coming out of a disappointing loss like this, it hurts.” Fans were not happy with Fields comments.

What a DUMB thing for Justin Fields to say pic.twitter.com/0NvgJXNvGB

However, on Wednesday Fields wanted to address the comments he made postgame and provide some clarity for fans.

“First off, I was frustrated after the game. Number one, I didn’t want to talk to you guys. I wasn’t in the mood to come and talk to you guys. So, I should’ve done a better job of explaining what I meant by that.

“I respect every fan that we have. I’m glad that we have fans. I would never disrespect anybody on what they do or what they love to do. It came off like that.

“Some social media outlets, they quoted my quote and they got a big buzz out of it. So, of course they did a great job doing that. Of course social media is going to do that. But I just wanted to clear that up.”

Fields went on to add that he will be clearer and more detailed in what he reflects on during postgame interviews.

“I talked to my dad about it, and as long as I’m going to be in this position there’s going to be stuff like that that pops up,

“So just knowing that as long as I’m in this profession that it’s never going to go away, so just got to either be really clear to everything that I say, be really descriptive to what I mean, or really just don’t say anything at all.”

The star quarterback will be hoping for redemption when the Bears host the Houston Texans on Sunday.