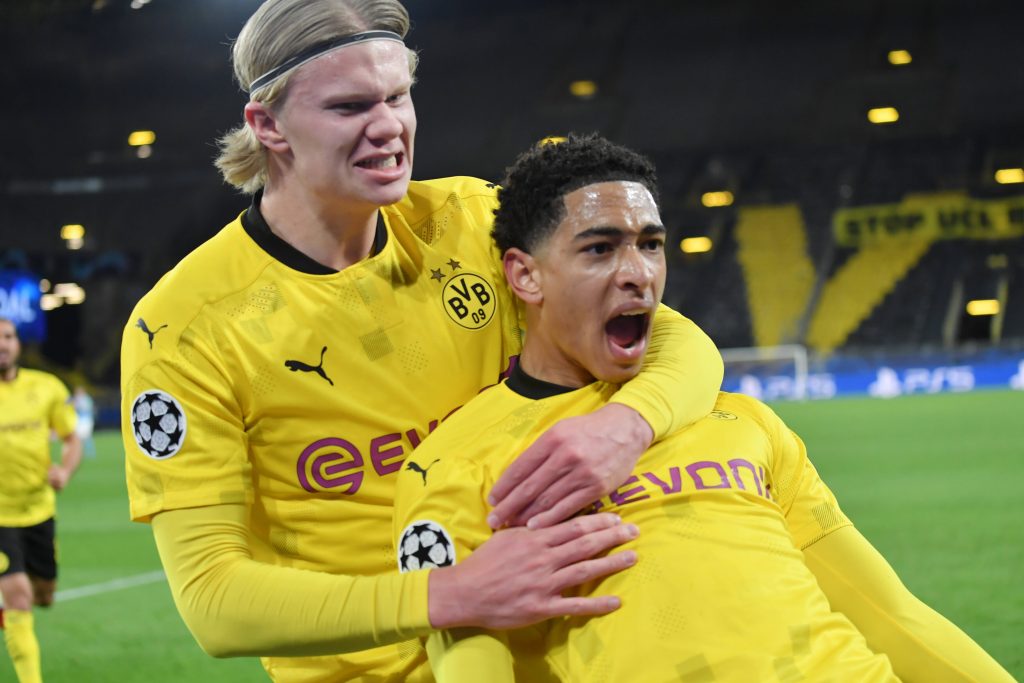 What a week this has been for Jude Bellingham! The Borussia Dortmund midfielder scored his first Bundesliga and Champions League goals in the last two matches, which were certainly well deserved after his phenomenal performances throughout the season.

Despite being 17-years-old, Bellingham has established himself as an integral player at Dortmund, racking up 39 competitive appearances for BVB.

For someone so young, the Stourbridge-born midfielder shows an unbelievable amount of talent and maturity beyond his years, which has attracted attention from all over Europe.

In the midst of all that, he was even called up by England, making his debut in November against the Republic of Ireland, where he faced Darren Randolph – a man who was playing competitive football before Bellingham could even walk – in the opposing goal.

His stellar performances in his side’s ultimately futile Champions League quarter-final tie have further increased his stock price in the footballing world, so let’s take a look at what Jude Bellingham is all about.

Born into – in his own words – a “working-class family”, Bellingham claims to have always stood out on the football pitch. However, he started a little bit later than many other professionals at the age of seven when he joined Birmingham City’s under-8s, who were based about 14 miles away from his town.

Mike Dodds, now the academy chief at Birmingham City, thinks otherwise, as he said that Bellingham didn’t really stand out till he was about 13-years-old.

He certainly shone thereafter, making his under-18s debut aged 14 and going on to join the under-23s a year later, for whom he scored a match-winning goal on debut after coming on as a substitute.

Naturally, his rapid progression was tracked closely by the senior team, who invited him to train when he was still going to school.

He was gradually phased into the squad, making his professional debut just a month after his 16th birthday when he started a League Cup match against Portsmouth at the start of the 2019/20 season as the youngest player in Birmingham City’s history.

The only way was up thereafter, as the young midfielder would make 41 appearances in the Championship for City, starting 32 matches in the process.

He was initially used as a left winger, but his quality was such that he gradually moved into a central midfield role, which is his natural position.

The youngster racked up four goals and two assists in the season, winning the EFL Young Player of the Season award thanks to his impressive all-round performances.

His defensive work rate was equally impressive, as Bellingham was among the top tacklers in the Championship while not looking too shabby in terms of interceptions either.

Starring in such a competitive league at such a young age obviously attracted attention from all over Europe. With Birmingham City fighting a relegation battle of their own, it was all but certain that their homegrown sensation would not stick around for too long.

Manchester United reportedly had a £20 million bid turned down on transfer deadline day in January, but it was all but confirmed that Bellingham would leave in the summer.

In the end, he chose Borussia Dortmund after noting the club’s positive history in terms of youth development, joining for a reported €27.5m with many performance-based add-ons, which made him the most expensive 17-year-old in football history – a title he holds to this day.

Such was his impact at Birmingham City that the club retired the #22 shirt in his honour after just one year of service to “remember one of their own and inspire others”.

When Bellingham signed for Borussia Dortmund on July 20, 2020, we predicted that he would go on to do big things but would probably not shine too brightly in his first season as finding a starting spot would be tough.

He has proved us (and most other experts) wrong with a stellar season that includes 23 starts and 11 substitute appearances in the Bundesliga and Champions League alone.

The young Englishman made his Dortmund debut against Duisburg in the DFB-Pokal, becoming the club’s youngest-ever scorer as he netted one of five goals.

In the next match, he made his Bundesliga debut against Borussia Mönchengladbach, where he got an assist for Giovanni Reyna’s goal.

Bellingham has only failed to feature in four games for his club since, becoming a key player in a youthful Dortmund side, which truthfully is not doing too well. 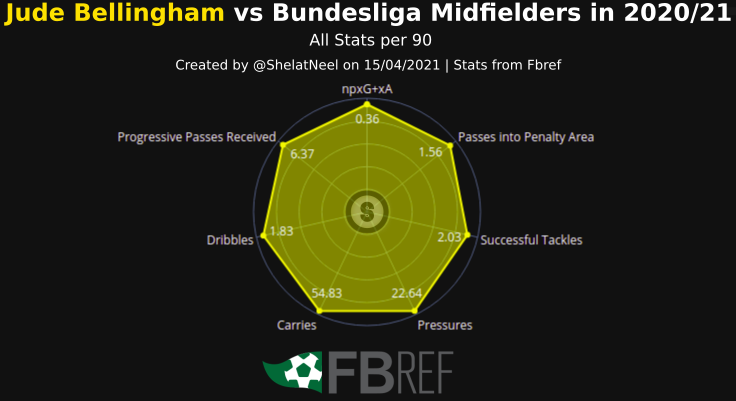 Bellingham, however, has been simply outstanding. As you can see in the above radar chart, the 17-year-old midfielder has been up there with the best of his kind in Germany in all facets of the game.

From productivity in front of goal (npxG+xA – non-penalty Expected Goals plus Expected Assists) and attacking involvements (passes into the penalty area and progressive passes received) to ball progression (carries and successful dribbles) and defensive work rate (successful tackles and pressures).

His work in the first half of Dortmund’s UEFA Champions League round of 16 second leg encapsulates all that the world-class Englishman is about. He opened the scoring with an excellent finish in the 15th minute.

Goalscoring is not Bellingham’s greatest strength or responsibility, but the highlight of his strike was the intelligence he showed in such a pressure situation to think of curling the ball into the far corner instead of just smashing it.

When Manchester City were piling the pressure on Dortmund, he made a crucial block on a Riyad Mahrez effort right in front of Marwin Hitz to keep his side in front, showing the defensive side of his game by being at the right place at the right time.

He was not too shabby in the first leg either, as his neat possession-play caused a fair few problems, and he was involved in the build-up to his side’s goal when he broke the City press by dribbling past İlkay Gündoğan.

Truthfully, Bellingham was robbed of a goal prior to that too, as his relentless pressing forced a mistake out of Ederson which allowed him to walk the ball into an open goal.

Although replays showed that his challenge was fair, the referee thought otherwise and blew his whistle before the ball crossed the line, rendering VAR powerless to intervene.

Such stellar performances in huge matches show that Bellingham has one thing almost all youngsters lack – maturity.

The 17-year-old can play with the swiftness and energy of a teenager, but if you strictly focused on his decision-making – even under pressure – you would think he’s 34-years-old.

This, while impossible to measure as a statistic, is what sets Bellingham apart from other young talents. They have potential; he has already unlocked world-class abilities and still has a long way to go in terms of development.

Being a standout player at one of the world’s best clubs is a tough job in itself, but doing it at 17 is simply insane.

Bellingham has everything a complete midfielder needs, as his shirt number proves. The 22 represents the sum of a 4 (Birmingham City’s idea of a defensive midfielder – it’s wrong), an 8 (an energetic box-to-box midfielder) and a 10 (a creative midfielder). England and Dortmund (at least for now) do not have to worry about their midfield as long as Bellingham is around.

We could well be witnessing a complete midfielder, and he is barely in his formative years right now. This phrase is often used too loosely, but Bellingham undoubtedly has the world at his feet.