Recently Catalan newspaper Sport ran an article on Fiorentina wing-back Juan Cuadrado where they claimed Real Madrid and Manchester United are keen to sign him in winter/next summer, with the Old Trafford club have had held talks with the Viola already.

Barcelona were thought to be interested in the Colombian. Mundo Deportivo claim today that in the summer they had tried to offer Afellay along with cash for Cuadrado, but the deal didn’t materialise. But, Barcelona didn’t make any official bid for him. 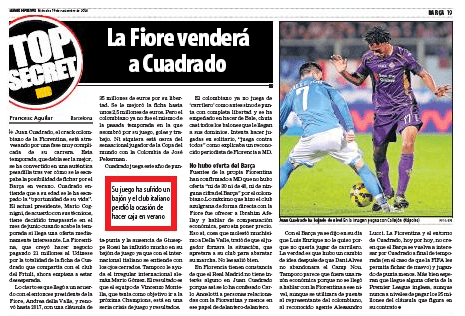 Mundo claim that Cuadrado is going through a difficult phase. He hasn’t been playing at his best and might be regretting the chance of missing out on moving to some of biggest clubs in the world. He has signed a renewed contract that will keep him at the club till 2017 and has a release clause of €35m.

Barcelona do not need him at the moment, and in case they sign him, he will be used as a winger and not as right-back. Mundo also feel, Real Madrid are not interested in signing Cuadrado as well, which leaves Manchester United as the front runner in this race to lure the Colombian superstar.