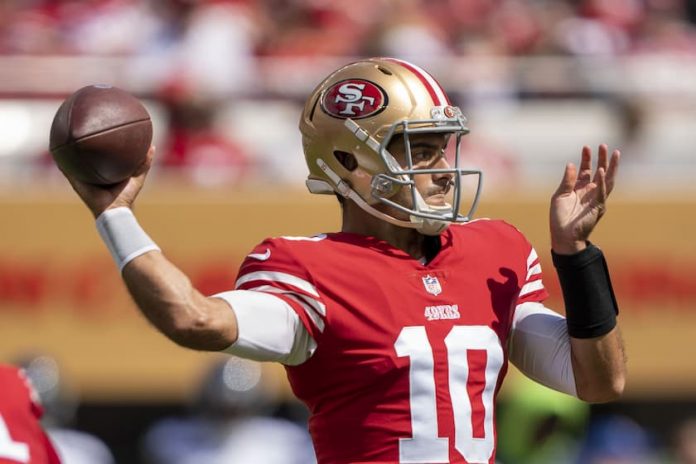 Earlier this year Jimmy Garoppolo restructured his contract with the 49ers. This restructure has enabled the quarterback to earn millions in bonus money this season.

With Trey Lance being injured Jimmy Garoppolo has taken the role of starting quarterback for the 49ers. Thanks to his newly revised contract the quarterback is set to make millions in bonuses which could make the 49ers regret the restructure.

When the contract was restructured, he agreed to accept a deal which gave him only $6.5 million in guaranteed money for 2022. However, this deal has millions in incentives. Let’s take a look at how much the quarterback could earn this season.

After his performance on Sunday, he earned an extra $350,000 and he reacted to his bonus in the clip below.

Jimmy G isn’t too upset about his $350K bonus for playing and winning today’s game 😅 pic.twitter.com/BIvTiWTPli

Throughout the regular season he could earn an extra $6.1 million if the 49ers are to go undefeated from now.

The incentives don’t stop there though. If the 49ers get to the playoffs there are added incentives for Garoppolo to earn.

It’s safe to say that Jimmy Garoppolo will be aiming to have his best season yet and achieve all these incentives.