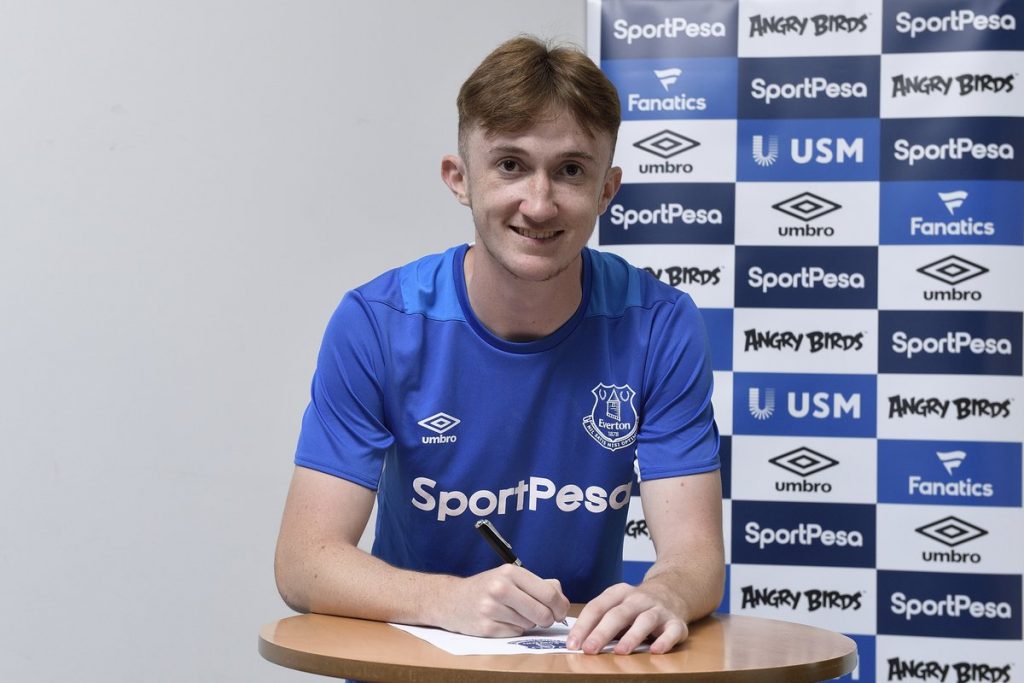 Everton have agreed on a new deal with their highly talented midfielder Jack Kiersey.

The 19-year-old has signed a one year deal with the Merseyside outfit and the agreement has been confirmed on the club’s official website.

Kiersey joined the Everton academy nine years ago and he has been a key youth player for them since then.

The midfielder is hoping to make his mark next season after a frustrating spell on the sidelines. Kiersey’s 2017/18 season was plagued with injuries.

An operation on his hamstring kept him out for most of last season.

Kiersey was expected to take one step closer to the first team last year and he will be determined to prove himself now. The midfielder was named the Under-18s’ Player of the Season in 2016/17.

Speaking to the media after signing his deal, Kiersey revealed that Everton is the ideal club for him and they have helped him develop as a player and a person.

He also explained how the coaches and the staff are helping him progress.

Talking about his goals for next season, he said: “Last year was difficult so I’m really happy I got a new deal and now I want to kick on and stay fit. I had an operation on my hamstring that kept me out for a lot of last season and I had a few other niggly injuries. But I’m ready to get back into it now. I’m fully-fit, strong and ready to go. I like to get on the ball, I’m box-to-box. I like to score, tackle and pass. I think I’m an all-round midfielder. I can go forward and attack and help the side defensively, too. Whatever role I’m given, I’ll do everything to make sure I help the team. Now I just want to stay fit and play as many games as possible. That’s my main goal.”

Best supporters in the world?
We’ve got kids here who have worked their bollocks off for years for this achievement and all you can do is be negative.
Probably the proudest day in the lads life.
Talking of life, why don’t some of you get one?
Well done Jack.
Good luck.

well done Jack but,,, but come on, next we will be hearing we are extending tim cahills contract too!

?Congratulations to U23 midfielder Jack Kiersey who has signed a new 1 year deal with the club. Here’s hoping for a good, injury free season pic.twitter.com/7ndbYkp0CN

Are any of these kids actually any good ? When I say good I mean actually good not Tom Davies good