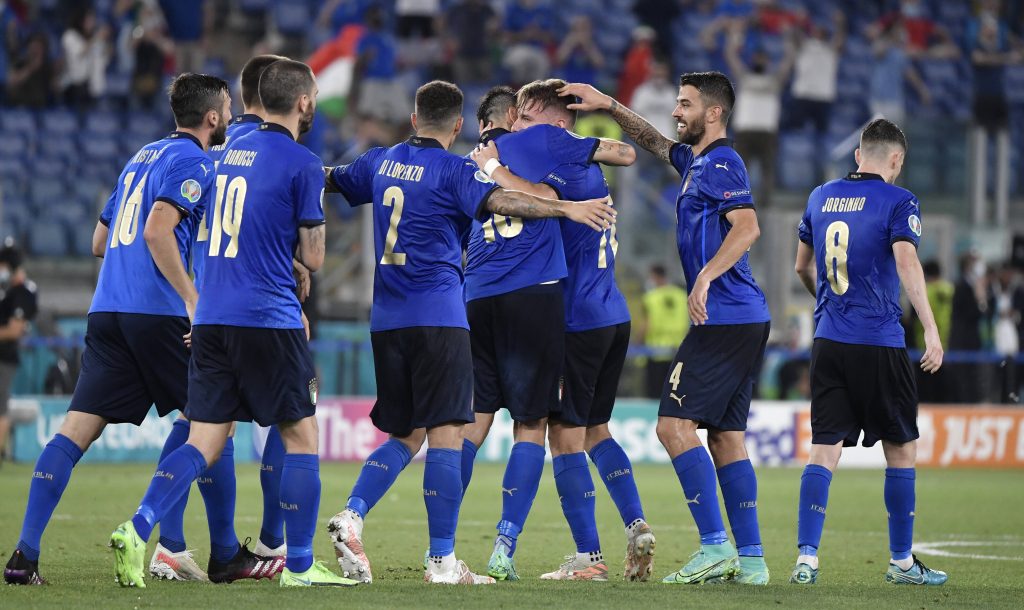 Italy and Austria will lock horns on Saturday night at Wembley with a place in the quarter-final of the European Championships at stake.

Interestingly, 50% of Italy’s 14 knockout games at the European Championships have ended level, with the Italians winning four and losing three in regulation time.

Meanwhile, Austria ended a painful 67-year wait for a knockout stage appearance at a major tournament.

Italy executed a masterful Euro 2020 group stage campaign, finishing top of Group A with all three wins to progress to the knockout phase as one of two teams yet to concede a goal.

The Italians take the field unbeaten in 30 consecutive international matches (W25, D5), winning the last 11 in a row ‘to nil.’

If they keep Austria at bay, Gli Azzurri will equal their all-time longest run of 12 successive clean sheets and set a new national record for 31 games on the bounce without losing.

Much of those hopes will hinge on Gianluigi Donnarumma, who left AC Milan to join Paris Saint-Germain as a free agent earlier this month.

Lazio talisman Ciro Immobile will be responsible for carrying the scoring burden after finding the back of the net in his last three appearances for the national team.

After Mancini handed Manuel Locatelli a rest against Wales on Matchday 3, the Sassuolo midfielder should return to the starting line-up against Austria.

The highly-rated playmaker, who scored a brace against Switzerland in the group stage, remains a transfer target for several top European clubs, including Manchester City.

Victories over North Macedonia and Ukraine proved sufficient for Austria to reach their first-ever European Championship knock-outs, finishing second to the Netherlands in Group C.

The Oranje inflicted the only loss on the Austrians at Euro 2020 so far, prevailing 2-0 in their ‘Matchday 2’ contest in Amsterdam.

Though they went to the semi-finals the last time they advanced to the knockout phase at a major tournament (1954 World Cup), Das Team are winless in their last four Euro matches against top-20 ranked nations (D1, L3).

A trip to London is likely to stir some unpleasant memories within the Austria camp, considering they have lost four of their six fixtures in the English capital (W1, D1).

After sealing North Macedonia’s fate in their Group C curtain-raiser, the former West Ham United striker had to skip a match against the Netherlands with suspension.

He returned to action against Ukraine but failed to trouble the scoreboard, remaining at 27 goals in 90 appearances for the national team.

Since suffering a 2-1 friendly loss in December 1960, the Italians have not lost any of their last 13 matches against Austria in all competitions, winning ten and drawing three.

Additionally, Gli Azzurri have outscored Das Team in all four encounters at major tournaments, with their last such win coming in the group stages of the 1998 World Cup.

However, it is worth noting that these nations have met only once in the 21s century, drawing 2-2 in a friendly meeting in August 2008.