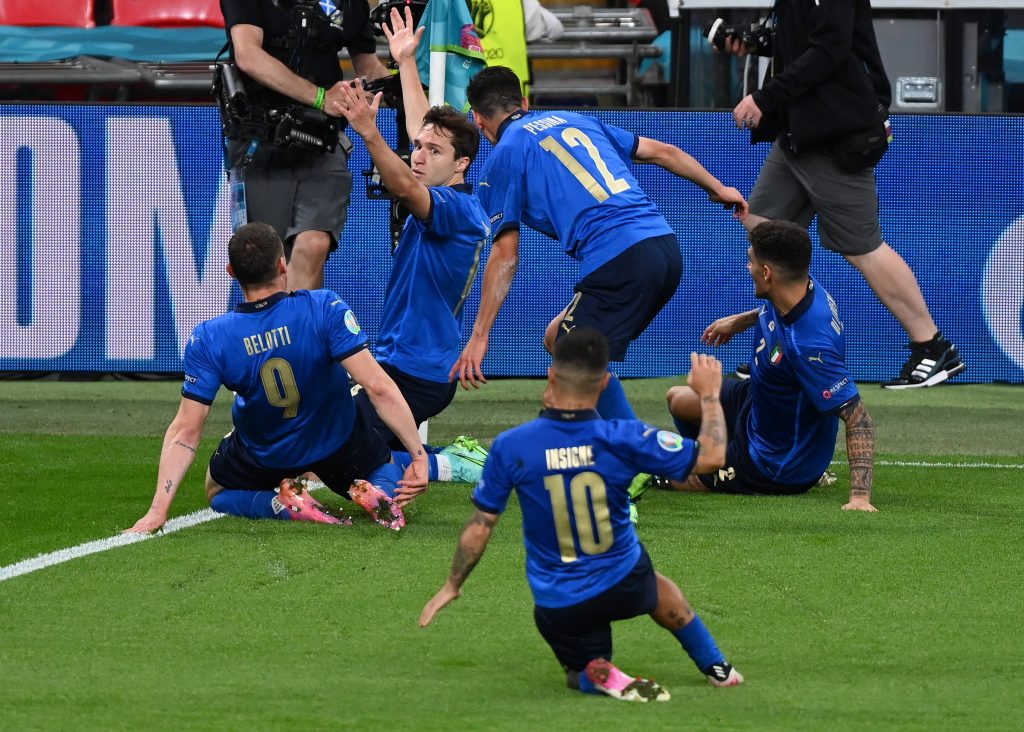 Italy made it to the quarter-finals of Euro 2020 after a tough evening against Austria on Saturday.

The first chance of note came in the 17th minute. Leonardo Spinazzola got down the left and played a low cross to Nicolo Barella, whose shot was denied by the right foot of Daniel Bachmann.

Austria responded with a chance of their own. Marcel Sabitzer floated a ball over the top for Marko Arnautovic, but the former West Ham United forward fired over on the half-volley.

The closest either side came to opening the scoring came through Ciro Immobile. The Lazio man hit a shot from 30 yards which clipped the outside of the post.

Italy had the better of the first half, registering 11 attempts to Austria’s one. Nonetheless, the two sides went into the break level.

Austria came out in the second half showing much more threat, and twice nearly got the opener. David Alaba’s free-kick went just over the crossbar, and Sabitzer’s long-range effort deflected wide.

And they thought they had taken the lead in the 65th minute. Alaba’s header found Arnautovic, who nodded in off the bar. However, replays showed that Arnautovic was marginally offside, and VAR ruled the goal out.

Italy were a long way from their potent best, creating just one opening in the second half. Spinazzola crossed for Domenico Berardi at the back post, but he could not get a clean connection on his acrobatic volley.

Regulation time ended with the scores still level at 0-0, taking the game to extra time.

The deadlock was broken early in extra time, and it was Roberto Mancini’s side who got it. Spinazzola floated a ball into Federico Chiesa. The substitute cut past Konrad Laimer and slammed a strike into the far corner.

And just before half time, they appeared to put the game beyond Austria with a second. Andrea Belotti laid the ball into Matteo Pessina, and he finished past Bachmann to make it 2-0.

But this wasn’t the end of Austria, who came out in the second half fighting with every breath they could muster.

Gianluigi Donnarumma had to be on his toes to deny a strike by Louis Schaub, and Sabitzer missed from close range after being assisted by Michael Gregoritsch.

Franco Foda’s side kept pressing and managed to find a breakthrough with six minutes remaining. Schaub’s corner was met at the front post by Sasa Kalajdzic, whose flicked header snuck in at the near post.

This was the first goal Italy had conceded during the tournament and their first in 12 games.

Austria put up a good fight, but they were unable to find an equaliser, meaning they bowed out in the round of 16.

Italy progressed to the quarter-finals, setting up an enticing tie with Belgium or Portugal.

Gianluigi Donnnarumma (6/10) – Made one good save from Schaub. May be disappointed to let in Kalajdzic’s header.

Giovanni Di Lorenzo (6/10) – Had one great run in extra time which almost led to a goal. Defended reasonably well but didn’t do a whole lot going forward.

Leonardo Bonucci (6/10) – Sometimes struggled to deal with the physicality of Arnautovic.

Francesco Acerbi (6/10) – Also didn’t have it easy against Arnautovic. Kept enough out.

Leonardo Spinazzola (8/10) *MOTM* – Often looked like the most likely to create something for Italy and managed to get himself an assist for the opener.

Nicolo Barella (7/10) – Looked good in the first half and came close to scoring. Struggled a bit in the second and was substituted early.

Jorginho (6/10) – Didn’t play with the class and composure that we’ve come to expect of him. Sometimes struggled in midfield.

Marco Verratti (6/10) – Was okay, but didn’t do enough to justify his place over Locatelli.

Domenico Berardi (6/10) – Had a good battle with Alaba down that side. Final ball wasn’t quite there most of the time.

Ciro Immobile (7/10) – Unlucky not to score an absolute screamer. Always looking to get in behind.

Lorenzo Insigne (6/10) – Got into some very good positions. Often wasteful when in the box.

Daniel Bachmann (6/10) – Made a couple of good saves. Couldn’t do a lot about the goals.

Stefan Lainer (6/10) – Dealt with Insigne well. Didn’t cope quite as comfortably with Spinazzola.

Aleksandar Dragovic (7/10) – Held firm for the 90 minutes, not allowing Italy to create much. Found it difficult in extra time when Austria were committing balls forward.

Martin Hinteregger (7/10) – Terrific in normal time. But, like Dragovic, didn’t have it so easy in extra time.

David Alaba (6/10) – Did well going forward and had an assist ruled out. Caught out of position for Chiesa’s goal.

Xaver Schlager (7/10) – Was at his brightest in the second half when Austria were on top. Cool and combative in midfield.

Florian Grillitsch (6/10) – Worked hard and won some duels. Didn’t get overrun against a technical Italy midfield.

Konrad Laimer (6/10) – Contributed something going forward and looked fairly good on the ball. Beaten too easily by Chiesa for the opener.

Marcel Sabitzer (7/10) – Was at the heart of everything Austria did in the second half. Positive and always aiming to make something happen.

Christoph Baumgartner (6/10) – Worked hard and got in some decent areas. Didn’t do enough in the final third.

Marko Arnautovic (7/10) – Caused problems all night for the Italian backline. Had a goal ruled out for a tight offside.