1974 – West Germany
On his 7th birthday Paul Gascoigne woke up in his Dunston home with one thing on his mind – the forthcoming World Cup Finals in West Germany… probably. But that day it was another Gazza making the back page headlines – a certain Silvio Gazzaniga. Who, you may ask?

Well signore Gazzaniga had just presented FIFA President Sir Stanley Rous with the new World Cup trophy, after the Englishman had generously let Brazil keep the previous trophy, the Jules Rimet (there is of course no truth at all in the rumor that the cup given to Brazil was in fact a fake). And it would be competed for the first time in June 1974 when the World Cup came to West Germany.

Just two years after holding the most controversial Olympic games of all time, the World Cup was due to kick off on the 13th June with a mixture of the new and the old. Amazingly when we look at football today there was no England, Spain or France in the final 16 but new countries appearing for the first time included Haiti, Zaire and Australia.

I have to say that at the age of four I had little interest in the tournament, preferring to play with my Lego although my dad did try to keep my interest up by buying me a Scotland shirt as well as my first ever Panini sticker album, which my brother helped me fill (every Saturday he would come back off his paper round with a bag full of stickers which apparently he was getting as a payment by sneaking the odd copy of Penthouse to a bloke at number 32).

England had been eliminated by the Poles at Wembley in the game that signalled the end of the Alf Ramsey era, as well as the international careers of players like Bobby Moore. This turned out to be no disgrace as the Poles were one of the stars of the tournament, eventually finishing in third place. To add insult to injury the Scots had qualified for the first time since 1958. They were then drawn in a group where second place seemed all but theirs along with Brazil, Yugoslavia and Zaire.

So the tournament kicked off in June at the Waldstadion in Frankfurt with what now is the traditional opening game format of the World Champions opening the tournament. As it was four years ago the first match was a 0-0, this time between Brazil and Yugoslavia.

The hosts kicked off their campaign 24 hours later in the isolation of West Berlin – as Germany was still divided at the time, against Chile. A 1-0 win was less than convincing although Carlos Caszely gained the honour of the first ever World Cup red card for the South Americans.

The first round will undoubtably be remembered for one incident though. Sure people will talk about the fact that Scotland were eliminated on goal difference without losing a game, Poland and Yugoslavia running up big scorers and East Germany famously getting one over on their hated brothers West Germany in Hamburg but there was one story.

THAT free kick. As a four year old I saw it live on ITV and immediately ran outside to practice it, ready for the play ground on Monday morning.

The date – 22nd June 1974; the venue – The Parkstadion in Gelsenkirchen. 77 minutes gone. Brazil have a free kick some 25 yards out. The Romanian referee pushed the Zaire wall back, blows his whistle and then…

Sheer World Cup heaven. In fact the Zaire team have been immortalised by Adidas in reproducing their shirt as part of their retro collection as well as via this excellent website.

The second round kicked off on the 26th June with an exhibition of Total football. The Dutch had impressed in the first round, with young midfielder Johan Cruyff showing a full repertoire of his skills. He was also something of a rebel and almost walked out of the tournament over the insistence of the Dutch FA to wear Adidas.

Cruyff had already done a deal with the other side of the Dassler family when he signed with Rudolph’s Puma brand. Faced with losing their most talented asset the Dutch FA allowed him to wear a special shirt with just two striped on the sleeves instead of the Adidas three stripes. The second round was now a group based competition with 2 pools of 4 teams, with the winners going directly into the final.

Two games in and four teams had 100% records and were due to meet each other in essentially semi-finals. The Poles had surprised many by winning all five games to date with Lato scoring six times. Brazil had never reached the heights of 1970 and had only managed goalless draws with Scotland and Yugoslavia. Hosts West Germany had been impressive apart from the game versus East Germany also then there was the Dutch.

Whilst the German’s game with Poland carried the national interest, it was the game in Dortmund that caught the imagination. The new order versus the old guard and it was the Dutch who came out on top in both terms of skill and poise with the attacking midfielders Cruyff and Johan Neeskens scoring a goal a piece in a 2-0. 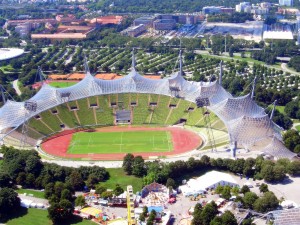 So to the final. In a move that would have left the British Tabloids proud, the German paper Bild ran a story that the Dutch players indulged in a party the night before the final with, shock horror “naked girls and champagne”. None of the allegations were ever proved but it must have had an unsettling effect on the team. So at 3pm BST on the 7th July 1974 English referee Jack Taylor led out the two teams into a full Olympic Stadium in Munich.

Game on, or not quite. Someone had forgotten the corner flags, and a desperate search for them took 7 minutes. One minute later and it was 1-0 to the Dutch without any German player touching the ball as Cruyff was brought down by Hoeness in the penalty area, and Johan Neeskens dispatched the spot kick.

The first half was a techy affair with Taylor struggling to control events and it was with some surprise that he awarded a 25th minute penalty when Wim Jansen (later to be Celtic’s manager) was harshly judged to have fouled Holzenbein and Paul Breitnar slotted the penalty away to level the scores.

It was fitting that the game was won by a legend. In his 67th and final game for his country, Gerd Mueller controlled the ball, swiveled and in one motion poked the ball home for his 68th international goal and one that saw the hosts lift the new World Cup.

Did I enjoy it – not really… but time would change my mind.