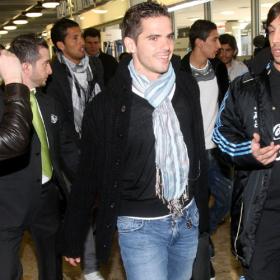 They came in a string, they came during the previous president Ramón Calderón´s era, I am talking about Marcelo, Gonzalo Higuaín and Fernando Gago. Gago in particular was seen as “the new Redondo” but destiny in Madrid has truly seen Gago and his white career spoiled. He debuted against Deportivo La Coruña and it was a catastrophical debut for Gago back in January, 2006.

Now he has been around the team for 5 years and he has in many ways been a healthy player for Real Madrid, the only problem for Gago this season (other than the fact that the club have invested in players in the same position) are his injuries. First he fights his way back into good shape just to get injured once again and this just continues.

For us who followed the team during Don Fabio Capellos era, the second one, we all know how much Gago meant for the team during that season, even though Beckham was the main protagonist that season for us. It seemed to us back then as if Gago had “eyes in the neck”, a phrase nicked during Guti´s long era at Madrid. Having eyes in the neck has basically in Madrid meant that you can pass the ball onto anyone, anyway, call it being blind like Zorro and at the same time having the same success as Zorro.

Whilst Gago was instrumental back then, he’s a shadowfigure of his former self during all of this season. It´s not just regarding his injuries I´m concerned, it is Madrid´s own wish to ring the alarm and buy someone in the same position as the argentinian plays in that scares me. We have Khedira, Lass, Granero and the undoubted Xabi Alonso in the same position as Gago plays in. Therefore these latest reports of Gago being on his way to the Premier Leauge must be met with truthness. He might in the end up there or even in the Serie A but he won´t continue to play for Real Madrid after this summer to come, that is a guarantee.

It is said that Mourinho is “far from happy” with Gago this season and no wonder why. Liverpool, Tottenham and Everton are the clubs in the Premier Leauge that are chasing Gago, i can just as well imagine he´ll have suitors in Italy as well. Mourinho cant gamble on Gago anymore, come on it´s Real Madrid we´re talking about and a player just can not be like a piece of glass and get broken as quick as they recovered from their last injury. It works for Kaká but that´s “a whole other matter” as I am sure everyone will realize. In a dreamworld Madrid would loan out Gago to a team where there are less demands on him but that´s dreaming. A more ideal solution would be to give Gago the last 2 months of the season for him to prove something for the team, still. But with Khedira and Lass shifting places and more direct favourites for Mourinho, i find that hard.

Gago´s contract runs out in 2013 and the club will want to generate some money on him rather than risking him leaving on a Bosman. Tottenham and Everton are said to be willing to cough up 11.5 million Euros for the argentine this summer, and if it were down to these two teams then I´d pick Spurs for Gago as they play a pacy football with quick passes, something Gago masters on his own level. But of course it´s a gamble for Redknapp as well with Gago´s injury history.

Whilst Marcelo is still developing and getting better and better and with Higuaín regarded as the club´s main striker right now it is a bitter pill to swallow for Gago, of course. They all came at the same time and a couple of years ago, Gago was the starter of these three. But that´s just a reminder for all us Madridistas that there´s no time to reflect in this club, you have got to be at your best at the precise moment, no matter what.

Gago costed 20 million Euros when he came and it´s still seen as some good business for the club. He has won two league titles and one Supercup during this time for the club. 5 years might be a short amount of time in other clubs, in our club not many players stay that long. Of course nothing is exactly 100% but surely Gago will be heading for the exit door. I just hope for the footballing genius that he is, he doesn´t rot away, i want him to be remembered and regain his best form.