Earlier this summer, Eddie Howe’s Bournemouth broke their transfer record. It had been only six months since they last made a club record signing in Benik Afobe. Afobe arrived from Wolverhampton Wanderers in January 2016, and proved an instant hit by scoring four goals in 12 starts as the Cherries finished with 42 points in their first Premier League campaign.

To add to their squad, and carry on from where they had left last season, Bournemouth spent £15 million on Jordon Ibe, their biggest ever outlay on a single player. Liverpool were the beneficiaries, and what Bournemouth got was a 20-year-old diamond still rough around the edges.

The Cherries sprang a surprise by going for a yet unproven player for that kind of money, despite the supposed availability of better, more experienced players in the market. Instead of kicking on to establish themselves in the Premier League after their solid beginnings, Bournemouth went for inexperience in Ibe, who, unlike Afobe, hasn’t hit the ground running.

The concerns raised by various parties in the aftermath of Ibe’s move to the south coast have more or less turned true thus far. Ibe has started in all of Bournemouth’s league games this season, and his end product has left a lot to be desired.

No goals or assists in 569 minutes isn’t what Bournemouth smashed their club record for. It isn’t that just the goals and assists are lacking. Ibe has also struggled to make much impact in general, leading to him being the most substituted Cherries player this season.

Howe has taken Ibe off during games with an alarming regularity, suggesting the England Under-21s international hasn’t done things on the pitch expected of him before kick-off.

This season, according to WhoScored.com, he has taken 1.3 shots per game, which is two shots per game less than Theo Walcott’s 3.6. Walcott, like Ibe, plays on the wings, and despite stylistic and qualitative differences between Arsenal and Bournemouth, Ibe could do much better than dribbling into blind alleys, and Walcott’s movements off the ball are things he could watch and learn.

Ibe’s dribbling and carrying the ball has been seen by many as one of his strengths, but he barely produces anything of note at the end of his runs. His key passes per game of 1.4 is pretty low when compared to someone like Dimitri Payet, who tops the league with 4.3 per game.

Last season, Ibe was among the top four players in the Premier League in carry distances. In this report produced by Opta, Ibe was found to carry the ball more than an average Premier League player did. He was behind only Wilfried Zaha, Duncan Watmore and Jefferson Montero in advancing the ball towards goal the most distance. 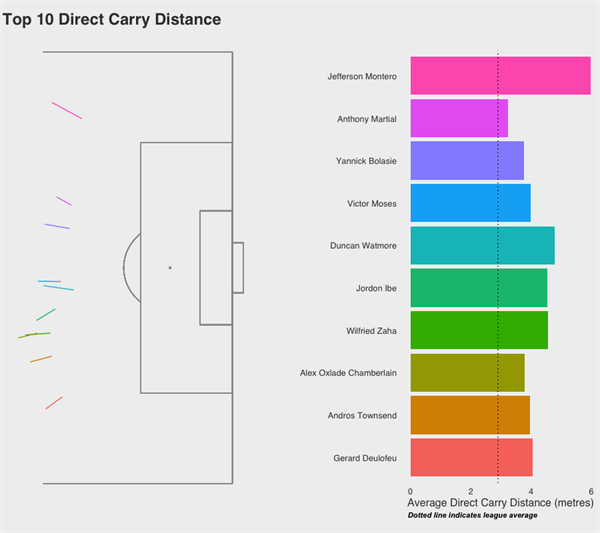 Zaha is one of the top dribblers in the league. The Crystal Palace winger’s 4.8 successful dribbles per game is the highest this season, while Ibe’s 50 per cent dribble completion rate marks him out as an average dribbler, despite his propensity to carry the ball and take on opponents.

Bournemouth have made a steady start to their second season in the top flight. Their wins over Everton and Hull City were particularly impressive. In the Hull game, Howe took off Ibe at the hour mark despite his team leading 3–1, and the Cherries then went on to win 6–1. Ibe is yet to settle in at his new club, but needs to move to the next level quickly to have any chance of repaying his club and manager’s trust in him.

“Like with all young players, we need to show patience and support. As long as he shows the right attitude with me every day, I’ve no doubt he will improve very quickly,” Howe told the Bournemouth Daily Echo ahead of the Cherries‘ league clash against Middlesbrough.

Ibe has time on his side, not least because of Howe, whose hardened stance on youth policy is well known. However, the Premier League is an unrewarding place for under-performers. Ibe — apparently Liverpool’s next best thing after Raheem Sterling — knows better than most about the implications of not living up to expectations.