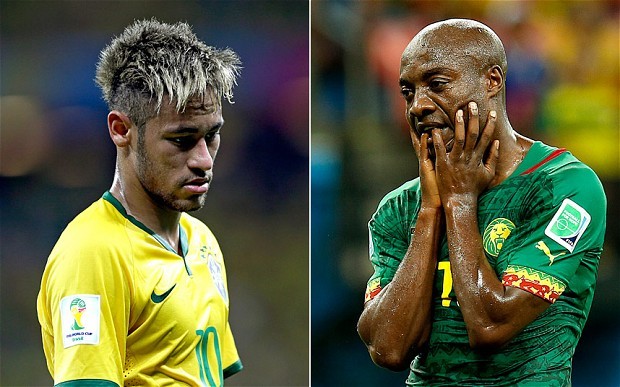 Hosts Brazil have under-performed at the start of this World Cup to many but remain on course to win Group A.

There have been a number of teams not live up to expectations so far – Argentina have won both of their games by a single goal, Germany dropped points to Ghana and Belgium have left it late in their two victories. Spain and England are already flying home.

Luiz Felipe Scolari’s side have not conceded a goal since Marcelo’s 11th minute own goal in the opener of the 2014 World Cup.

Today sees them take on a Cameroon side who have already been eliminated from the World Cup and have yet to concede a single goal.

After being eliminated from the World Cup after two games four years ago, the Indomitable Lions put up a respectable final game, only losing 2-1 to eventual finalists Netherlands with Klaas-Jan Huntelaar scoring late on. The Dutch only needed a point to win the group however.

This Brazil need to put confidence back into the fans after a disappointed 0-0 draw which in truth was largely down to the excellence of Mexican goalkeeper Guillermo Ochoa.

I am expecting Brazil to come out on the offensive to take advantage of a dejected Cameroon side who have been beaten 1-0 and hammered 4-0 against Mexico and Croatia respectively.

This means Brazil scoring in the first half and winning comfortable.

Cameroon’s lack of firepower in this World Cup has seen them force just 3 saves out of opposing goalkeepers in 180 minutes of action so far.

A big win is required if Brazil are to make the rest of the competition fear them. This is possible against a Cameroon defence that Croatia tore to shreds.

Brazil have little control over their destiny – victory should be enough to win the group baring a big win for Mexico to overtake the hosts on goal difference.

However they will know the winners and runners-up of Group B prior to kick-off as Netherlands and Chile do battle hours before Brazil kick off.

Both of the Group B sides have looked more impressive in their opening two matches and it was the Netherlands who eliminated Brazil four years ago. Could Brazil be knocked out in the second round of their own hosted tournament?

Brazil to be eliminated in the second round is 3.10