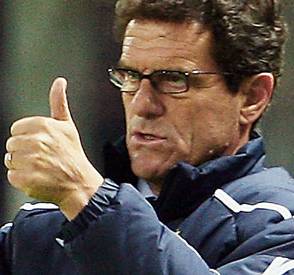 With the date of his departure already set in stone, England manager Fabio Capello has already vowed that his £6 million-per-annum contract with the FA will be his last in football – a final appendix to his glistening 47-year career that is already looking more like a high-rolling pension than a swansong of any substance.

As his finite hours continues to wick away, it is only natural that an elderly gentleman’s thoughts should turn to running the rule over his younger, more vigorous and less world-weary successors – and 64-year-old Capello, of course, is no exception.

The veteran Italian has sounded out two potential junior candidates to take on his mantle in 2012, with spring-heeled Tottenham manager Harry Redknapp (who is 257 days younger) and relative neophyte Sam Allardyce of Blackburn Rovers (a yawning eight years Capello’s junior) both finding themselves shunted firmly into the frame by England’s incumbent.

“In this moment (Sam) Allardyce and (Harry) Redknapp are doing very well because they have different players, they have good style and get results with them.

It is important for a coach to understand which type of players they manage and find the best style.”

To be perfectly honest, Capello’s seemingly Anglo-centric recommendations are entirely biased and more than a little misrepresentational, as the original question posed to him concerned the ‘best performing English manager on current form’ not who he thought should replace him at the Three Lions’ helm

The fact that Allardyce was also present (in a ‘guest speaker’ role) at the launch of  the FA’s new football coaching manual may also have coloured Capello’s response somewhat – but hey-ho, such is life.

Taking his turn at the podium, Allardyce took the opportunity to begin listing his apparently numerous managerial flaws and short-comings which, in front of a simpering FA delegation, is possibly not the best job-interview strategy ever devised:

Fabio (Capello) has talked about how he had to go from dealing with players on a day-to-day basis to having, all of a sudden, to deal with working with them now and again.”

Allardyce continued to effectively write himself off:

‘’Being an international manager is all about getting the best footballers available to you who are as fit as possible and putting those players in the best formation to get a result.

You’d have to work out the best positions for all the players and that would be very difficult I would think. I have not been there but the pressure that they experience is immense, far bigger than they experience at their own clubs.’’

The final word went to the FA’s Director of Football Development, Sir Trevor Brooking, who revealed that he and his organisation invited Allardyce to the conference in recognition of the forward-thinking reputation that the former Bolton and Newcastle boss has carved out for himself during his 20-year managerial career:

“Sam has always had a big team of support staff so he is very much into performance, video analysis, a lot of detailed backup which is really important as a coach. That’s the way the world is going.

You will perceive Sam as this, and other coaches as that, but we want to produce good quality players over a period of time and Sam has got some really good characteristics as a coach.”

Any takers? No, I thought not.