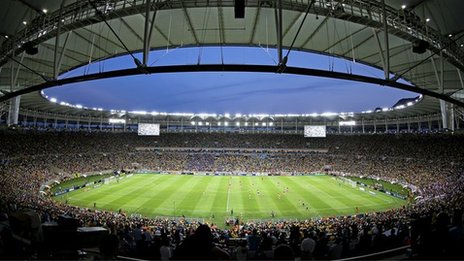 The games are just a week away, and in many senses, the cruelest part of the tournament is over. The squads have been announced, the numbers assigned, most of the friendlies played, and the pre-tournament injuries are mostly over.

In the past month, we’ve seen players lose their World Cup dream in a multitude of ways, most often, just getting cut. There’s something very harrowing about trying to actually make a team – it’s a throwback to high school or Little League for the best footballers in their respective countries.

The World Cup makes these people at the very top of their game feel very small indeed. Brazil is the only place in the football world to be right now, and we’re just about there.

Here are all 32 World Cup team’s campaigns summed up in one sentence.

Mexico: Prepare to be entertained.

Croatia: In 42-year old two-games-managed-in-his-senior-career Niko Kovac, we pretty much trust – but we’d rather have Slaven Bilic back.

Cameroon: Eto’o: Like a fine wine – better with age.

Spain: Stop talking about our legacy: We’re already the greatest international team ever.

Chile: We’ve got at least one shock win in us.

Columbia: We never really thought we’d have to go without Falcao – what now?

Italy: I’m not too sure – can we get a match-fixing scandal to rev everyone up again?

England: I don’t know whether to laugh or cry.

Uruguay: Enough with the Suarez jokes – no, our official team song is not sung by a posh new group called Handball On The Line.

Costa Rica: We play a lot of good teams in this group, but no great ones.

France: Nothing says “it’s all about team spirit” like dropping Samir Nasri.

Ecuador: This team has had a lot of bad luck – the good luck should hit just as the tournament starts.

Honduras: Nothing screams “we’re ready” like a 4-2 friendly loss to Israel.

Argentina: We think we’ve been better than Brazil since the days of Di Stefano, but now we have a chance to prove it.

Bosnia and Herzegovina: Fairytale, anyone?

Nigeria: Is it good when the coach is regularly described as “ruthless” and “cold-blooded” in the media?

Iran: Anything is possible with Steven Beitashour.

Germany: This team may have great talent, but it’s nowhere near German enough.

Portugal: So, how are our other 22 guys looking?

Ghana: Once you go down the witch-doctor road, you’re at the point of no return.

USA: We miss Donovan, but we’re supposed to focus on the people actually going to the tournament: So, I’ll pedal the rumor that Jurgen Klinsmann drinks bubble tea off a steak knife.

Belgium: Everyone’s well-publicized dark-horse since May 2011.

Russia: Our team is plenty likable: Look, Fabio Capello is the coach!

Algeria: Get ready for red cards and 0-0s kids, we’re always a bundle of joy!