Premier League have announced the fixtures for the 2018/19 season and Everton fans will be excited about the new season under Marco Silva.

The Toffees have been handed a reasonably good start to the season and Silva will be hoping to take full advantage of that.

Everton will face the likes of Wolves, Southampton, Bournemouth, Huddersfield, West Ham, Fulham, Leicester City and Palace in their first ten games of the season.

The Merseyside outfit will have to ensure that they start the season well and carry some momentum into December. Everton will have a tough festive period where will play seven league games in the space of a month.

The Toffees will take on the likes of Manchester City, Tottenham and Liverpool in December.

Everton will be hoping to secure a respectable finish next season and Marco Silva will certainly fancy his side’s chances after seeing the fixture list. 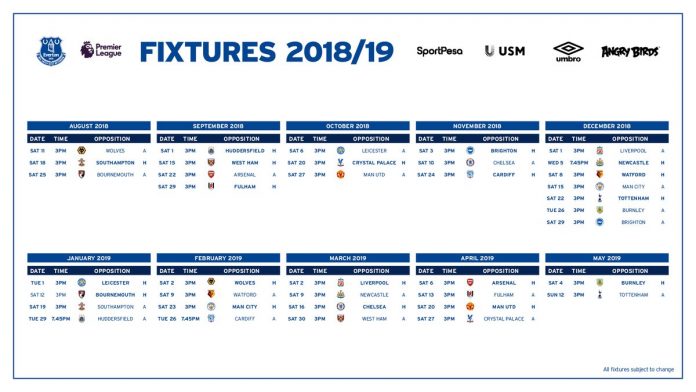 Here is how the Everton fans reacted to the news on Twitter.

Tottenham last game of the season to win the league. Sound ??

Easiest start we’ve had in years, let’s not fuck this up for once

We haven’t even got one solid month there you know

Nicely spread out fixtures them! No back to back big teams! #coyb

Sound that, up the blues.

Nice start for us lads up the toffee’s

Top of the league end of September…. ?