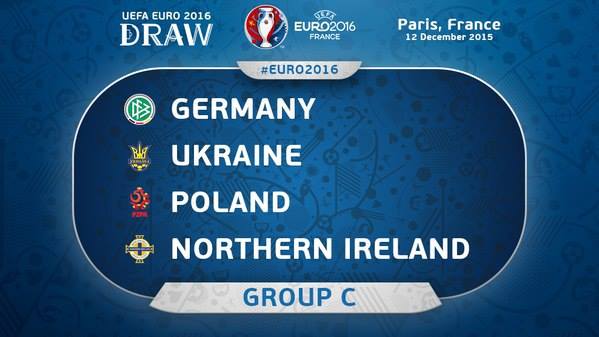 Germany is getting out of the group and that’s that. Unless the cup turns into a fiasco, like in 2004, one thing is certain: the Germans will be a team feared by everyone. You only need to take one quick look at their squad to realise they are full of options and even dropping Marco Reus out of the final team, they have enough weapons to destroy any defence. The Central European giants have won the title 3 times and have always reached the semi-final, except on three occasions. With those numbers, Germany is a safe bet. The current World Champions placed third on the most goals scored list during the qualifiers and got out of a fairly dangerous group shared with Poland, where they won seven times, tied once and lost twice, not being able to beat Ireland surprisingly. But this is common for the German National team, it’s all a game until the tournament begins. Once the last stage begins, there is no stopping the train. Ask Brazil, they remember it only too well.

Northern Ireland will be looking to get out alive of a very difficult group. It is a hard feat, but not an impossible one. After getting the best of Romania and Hungary during the qualifiers and managing to lose only once during the process, Northern Ireland surprised the world with their determination and discipline. The National team of Nothern Ireland is debuting on France 2016 and will be expected to have a fierce fight against Ukraine for a third position, but nobody is giving them much chance against the two big teams. Maybe they can surprise us all.

Poland is the team to watch during this competition. Similar to the hype Belgium created before the 2014 World Cup, the Polish have done an amazing job in the last years. They lost only once during the qualifiers. Even Germany, the first place of the group, lost twice. They managed to beat the World Champions in Warsaw and secured the title of the team scoring the most during the competition. Robert Lewandowski proved once more he is the most dangerous striker in the world and scored thirteen times. Their inexperience in big tournaments may play against them; they have never managed to get past the group stage, but this is definitely an opportunity for the boys coached by Adam Nawałka to show just how serious they are and how much of a golden generation they are.

Finally, we have Ukraine. A team that has never done particularly well on their own, even though they had sparks of brilliance in 2006, when Shevchenko led the team. For this tournament, the Eastern European country has few chances of advancing and will be looking to get that coveted third place that can see them through. A surprise is not ruled out, since they did well in the qualifiers and managed to reach the playoffs, coming third to Spain and Slovakia, and squeeze to France 2016 by getting rid of Slovenia rather simply. The boys in yellow need to gather their strengths, and by that I mean their defence. They did a commendable job stopping opposing attackers and conceded only four times, but never allowed more than one goal per game. Keeping their back line polished may send the work against the Polish. I know… awful joke.

Top scorer, the heart of a lion, a warrior, Klose‘s record hunter. All of these titles apply! The number 13 has a responsibility to lead his nation to the title. Germany is definitely going through a golden period of transition, but rarely, has enough young talent to not be concerned for the future. With the farewell of Philip Lahm and Bastian Schweinsteiger‘s injury, it‘s up to Thomas to become the beast he normally is during official competitions. Watch out for Mario Götze too, he has a lot to prove. (Because being a World Champion at 24 and scoring the deciding goal is apparently not enough for his age).

The striker bears the difficult challenge of breaking Manuel Neuer and company. He is Northern Ireland‘s second top scorer in history and can definitely harm defences if he gets enough chances. Naturally he is rarely going to construct said opportunities himself and requires the assistance of captain Steven Davis and the White and Green army midfield to be able to cause their opponent a real scare.

I doubt any natural striker is more dangerous than the number 9 at the moment. Top scorer in the Bundesliga and the qualifiers, Robert Lewandowski just can‘t stop scoring! Poland is a scoring machine and their captain can steer the wheel in the playoffs direction. Pair him with Arkadiusz Milik, Jakub Błaszczykowski and Kamil Grosicki and you have an explosion waiting to happen. The Polish National team has enough quality everywhere to make sure they finally get past the group and even to the top eight or four if they play their cards right.

Ukraine‘s top scorer is also the leader of the midfield and the creative part of his National team. The winger born in Leningrad has a rate of 1 goal every 2 matches and tends to come through in important matches; he scored in both games of the play-off against Slovenia and if he is able to establish a stable connection with Sevilla‘s Yevhen Konoplyanka, Ukraine can do a better job than expected. Maybe repeating the 2006 World Cup feat is a long shot, but for a team that is fairly new, the sky is the limit.

How could Group C develop?

Germany – Prediction – 1st Place: Surprise? No. The German team had a few bad years of transition but has now established themselves as a powerhouse in the last years, even managing to claim the first place Group B in Euro 2012, a feat they had not been able to accomplish in sixteen years. The group is simple enough for the Germans to repeat the feat if they acquire a stable pace and lock their mindset in tournament mode from the start.

Poland – Prediction – 2nd: They are getting through, no question. The attacking threat that Poland has become is set to demolish their rivals and play at a level ground against Germany. For the first time in decades, the Polish National team can claim the first place of the group. However, I don‘t see them beating Germany during the tournament, but I don‘t rule out a tie.

Northern Ireland – Prediction – 3rd place:  I believe the Northern Ireland squad will be rewarded with a third place and a victory over Ukraine. They have built a consistent side and are ready to secure a memorable victory on June 16 at Lyon. Their other two matches look a bit grim and there is no clear chance for them to secure even a draw, in my opinion. That is not a stab against Northern Ireland, Germany and Poland are just too good at the moment.

Ukraine – Prediction – 4th Place: The Ukranian National team has landed a spot within a very tough group. Their chances were reduced by 45%  when they were paired against Germany and they took another blow when Poland joined them. There is no way they are going to make it out of there alive. They start against Germany and play their crucial match against Northern Ireland only 4 days later. They have 5 days to make history or break their chance to advance.

Germany vs Poland. Yes! This will be a magnificent display of top-quality football and the reason all of us football fans live for. Mark your calendars: June 16 at the Stade de France. Lewandowski facing his Bayern teammates, which include Manuel Neuer. Boateng and Hummels trying to stop the current best attack in Europe and Mario Gómez looking to continue his streak as a deadly striker.