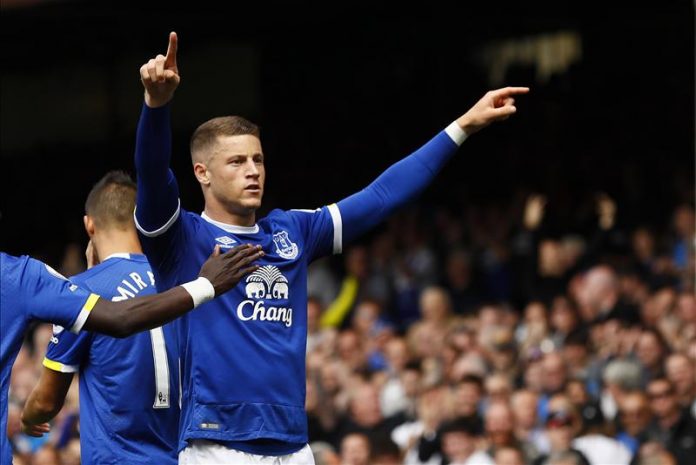 Premier League champions Leicester City suffered a shock 2-1 defeat against newcomer Hull City in the opening match of the brand new 2016-17 Premier League season at the KCOM stadium on Saturday.

Erik Lamela scored in the second half as Tottenham came from behind to secure a 1-1 draw against Ronald Koeman’s Everton at the Goodison Park. 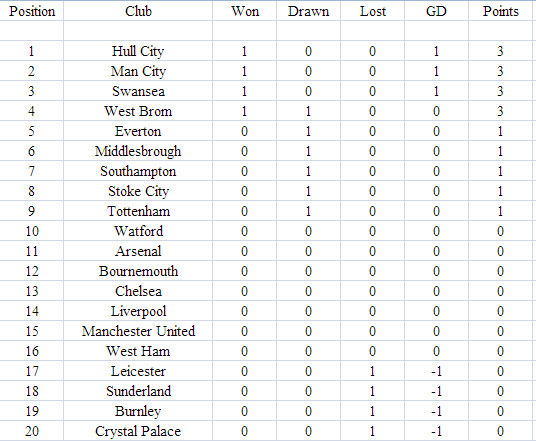 Claudio Ranieri said after the match his team played “individually” and “not as a team” as the Foxes suffered a shock defeat against Hull City.

Leicester became the first team as reigning champions to lose their opening league game of the next season since Arsenal in 1989/90.

Leicester: Are the first reigning champions to lose their opening match of the season in the Premier League era #HulLei

Hull City produced a spirited performance and took the early lead through Abel Hernandez who scored from a wonderful bicycle kick from six yards out.

In the second half, Riyad Mahrez restored parity from a spot kick after Demarai Gray was brought down in the box by Huddlestone.

The atmosphere inside the stadium was electrifying despite the fans protest against the owners and Hull City responded with Robert Snodgrass netting the winner with a lovely strike with his left foot.

Ross Barkley gave Everton an early lead from a curling free kick. The half went bad to worse for Mauricio Pochettino’s men as Hugo Lloris was withdrawn before half-time with a hamstring injury.

Spurs enjoyed loads of possession and got their rewards in the second half when Lamela scored with a  glancing header meeting a delicious cross from Kyle Walker.

Loads of positives there against a good side. Players so much more combative and aggressive. More to come hopefully! #EFC

At Turf Moor, Leroy Fer’s late goal earned Swansea full three points on the opening day. Tom Heaton, the Burnley goalkeeper, could hold on to a cross from Jefferson Montero and Fer tapped in from close range.

Dean Marney nearly scored for the home side but Lucasz Fabianski produced a fine late save as the Welsh side held on to the slender lead.

Salomon Rondon scored the only goal at Selhurst Park as Crystal Palace start their new 16-17 season with a 1-0 defeat to West Brom at home.

Spanish striker Alvaro Negredo marked his Boro debut in style with a brilliant goal for the newcomers. Swiss playmaker Xherdan Shaqiri scored a sensational goal to level the tie for Stoke City.

French midfielder Etienne Capoue fired from close range to give the visitors an early lead after Troy Deeney created space for the midfielder.

Nathan Redmond, who joined from Norwich in the summer, scored on his first Premier League appearance for the Saints volleyed Tadic’s corner home to level the tie.

In the late kick-off, Pep Guardiola begins his Manchester City tenure with a 2-1 win over Sunderland, thanks to a late own goal from Paddy McNair.

Sergio Aguero converted a penalty to give City the lead within opening five minutes. The Argentine becomes the top scoring player in the Premier League in 2016, scoring 18 goals in 19 games.

In the 71st minute, Jack Rodwell did well to slip the ball through Defoe inside the box and the former Spurs striker puts it away with a clinical finish. According to Opta, Jermain Defoe has now scored in 16 different Premier League seasons.

The game swung in favour of Manchester City, once again, after Paddy McNair, the man who replaced Jermain Defoe, scored an unfortunate own goal.

He [Pep Guardiola] had his hands on his head at one point as the blood pressure levels rose and the City fans started to panic. He got his – deserved – three points but if this is the Pep way, it is more English than we thought.

The games are coming thick and fast for Guardiola: next up for City is the first leg of their Champions League qualifier against Steaua Bucharest in Romania on Tuesday.