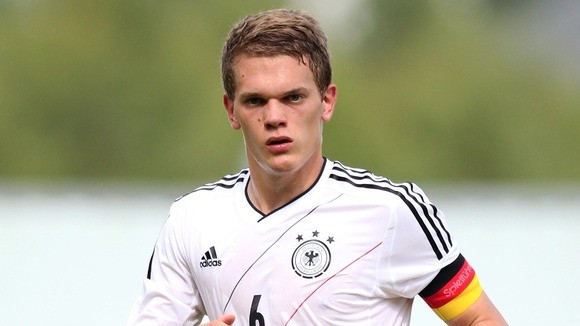 With Nemnja Vidic already committed to decamping from Old Trafford at the end of the season, and Rio Ferdinand widely considered to be looking at his options when his contract expires at the same time, it’s likely that part of Manchester United’s summer spending spree will be focused on a centre back, and Freiburg’s Matthias Ginter looks to be in the frame.

Reports emanating from Germany suggest that David Moyes has had the 20 year old watched on occasions and was also at the game between Freiburg and Hertha Berlin last month to personally run the rule over the defender.

Ginter has been quizzed about the interest from the Premier League champions, and has been happy to concede that he would be interested in such a move. He did however state that “If it is true, I am of course honoured and excited. On the other hand, there is still a long way to the summer.”

Clearly that’s the case and it would be folly to assume that Moyes list of potential acquisitions is limited to a single name for each position. Ginter however would fit the bill for the sort of purchase that United are seeking. The 20 year old is still young and has further strides to make in his development, but is already considered one of the Bundesliga’s brightest young prospects.

Ginter’s current contract with Freiburg runs until 2017, so nominally there’s no great imperative for the German club to sell their asset. That said, the club is struggling at the moment, and a bid of £10million or so is likely to raise their interest.

Other clubs are also thought to have an eye on the defender with both Premier League rivals Arsenal and European Champions Bayern Munich linked with the player. Should a bid be registered therefore, it’s unlikely to be an uncontested fight for the player.