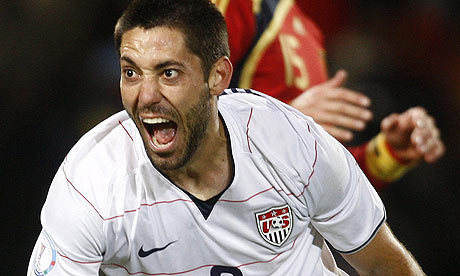 Much was made of national head coach, Jurgen Klinsmann’s World Cup snub of Landon Donovan and last night’s friendly almost left the German with some very tough questions to answer, until 2 of his subs found a breakthrough on the 75 and 81 minute marks.

The USMNT faced a very average Azerbaijan side at Candlestick Park in San Francisco and before the whistle even blew to start the game, they had lost Clint Dempsey to injury. Luckily, that appears to be a short-term healing process and not a World Cup concern, but it left Klinsmann with some last minute decisions about who would head his attack. Jozy Altidore and Chris Wondolowski were chosen as the front pairing and Mikkel Diskerud started on the bench in Dempsey’s famous #10 shirt.

USA performed well enough and dominated the possession, at around 70%, and the attacking chances, more than doubling the shots of the Eastern Europeans, but they didn’t really put in a performance at the level they’ll need to reach to compete against Germany, Portugal and Ghana next month.

That said, there were definite positives; Altidore displayed some promising abilities that could serve the USA well against Germany and Portugal, with the way he held the ball up from long balls and clearances, buying the likes of Michael Bradley and Jermaine Jones time to make forward runs. Wondolowski was very eager to get in the box and get on the end of crosses, but ultimately he made most of his chances a little too easy for the keeper to deal with. Both the strikers Klinsmann brought on as subs made the most of their opportunity to shine by hitting the back of the net; Diskerud looking particularly hungry to impress, when he headed down to Michael Bradley on the edge of the box and then poked home the rebound from the midfielder’s blistering shot.

AZ Alkmaar attacker Aron Johannsson came on in the 63rd minute for Wondolowski and got his head excellently on the end of Dynamo Brad Davis’ corner to make it 2-0, but he was given unprecedented freedom by his Azerbaijani marker, who merely observed his run. With the group they have been drawn in, USA are unlikely to see lackadaisical marking of this ilk in Brazil.

Turkey will provide a better challenge on Sunday, with a much tighter and more organized defensive line, allowing Klinsmann to see his striker’s cope with a little more pressure when attacking. Despite a disappointing and failed World Cup qualification campaign, the Turkish will not give USA as much freedom in the box and time on the ball as Azerbaijan did.

The USMNT also face Nigeria on the 7th, in their final friendly 9 days ahead of their World Cup opener against Ghana at the Estadio das Dunas.