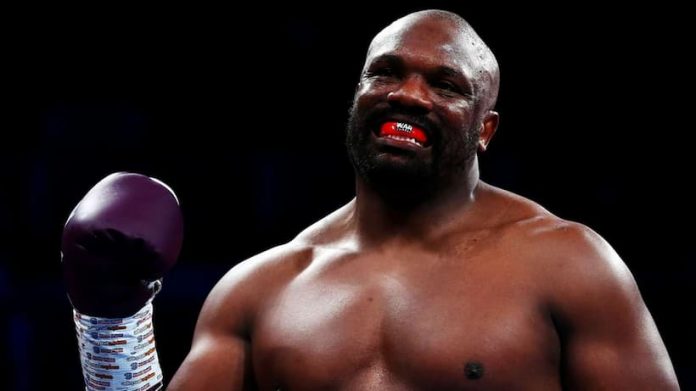 DEREK CHISORA has confirmed that he will NOT be retiring after Saturday night’s fight with Kubrat Pulev at the O2 Arena even if he were to lose. ‘Del Boy’ has had 44 fights as a professional boxer, winning 32 and losing 12.

The 38-year-old Londoner has insisted that there is still plenty of fight left in him and that from now until the end of his career, Chisora will be looking to make as much money as possible from the sport of boxing.

Chisora Not Thinking Of Retirement Yet

Despite being 38-years-old and this bout on Saturday night being his 45th professional fight, Derek Chisora has insisted that he is not yet ready to call time on his career.

The former European heavyweight champion has lost his last three fights, and is looking to stop the rot this weekend when he rematches the Bulgarian, Kubrat Pulev.

The veteran heavyweight has been an unbelievable servant to British boing and is somewhat a legend of the sport, but has lost to heavyweight champion, Oleksandr Usyk, and Joseph Parker on two occasions in his previous three fights.

Chisora turned pro 15 years ago, and for the past decade or even longer has fought the ‘who’s who’ of the heavyweight division. ‘Del Boy’ has faced the likes of Vitali Klitschko, Tyson Fury, Dillian Whyte, Oleksandr Usyk and Joseph Parker in his long and illustrious career.

Back to Saturday night’s fight against Pulev. First time around, Chisora couldn’t get out of the way of Pulev’s ramrod jab, but still feels he did enough to win the fight in Hamburg six years ago.

However, Chisora felt he did enough to win the fight, but ultimately doesn’t care about the result, as long as he earns money and puts on a show for his ever-loyal supporters.

In recent times, boxing fans have expressed their desires for Chisora to hang up the gloves, before he sustains any further punishment and while he still has all of his faculties in tact.

Chisora’s last win came back in 2019, when he knocked out David Price, but since then, ‘Del Boy’ hasn’t won a fight. However, when asked about whether retirement is on the cards soon, Chisora said, “I’m not retiring for s**t. I’ll tell you that now.”

The 38-year-old British boxing legend went on today, “I enjoy boxing. I enjoy training, I enjoy fight, the whole promotion, that’s all. When I don’t enjoy it any more, then I will announce my retirement.”

Chisora vs Pulev 2 headlines Matchroom Boxing’s show this weekend, and is live to viewers all around the world on DAZN.

Check out our betting tips and predictions for this mammoth heavyweight rematch on Saturday night from the O2 Arena, London between Derek Chisora and Kubrat Pulev.

New Trainer for ‘Del Boy’ Ahead Of Pulev Rematch?

Having worked for years together, before splitting up and getting back together again, Derek Chisora has confirmed that Dave Coldwell will not be in his corner on Saturday night against Pulev.

Chisora had Coldwell in his corner in December for his rematch with Joseph parker, but ultimately wasn’t able to avenge his loss. ‘Del Boy’ has moved base from London to Sheffield to train with Coldwell, but has confirmed that will no longer be the arrangement from now on.

Although the pair have split, Chisora insists it is simply down to business, with the heavyweight veteran no longer wanting to travel up north.

Chisora has confirmed that he will have anew coach in his corner for the Pulev rematch, who he has been in training camp with for several weeks leading up to this fight.

When asked about his new training arrangements and who the new coach may be, Chisora said, “It’s a surprise. It’s not a surprise to me, but you will see.”

Check out our betting tips and predictions for this mammoth heavyweight rematch on Saturday night from the O2 Arena, London between Derek Chisora and Kubrat Pulev.