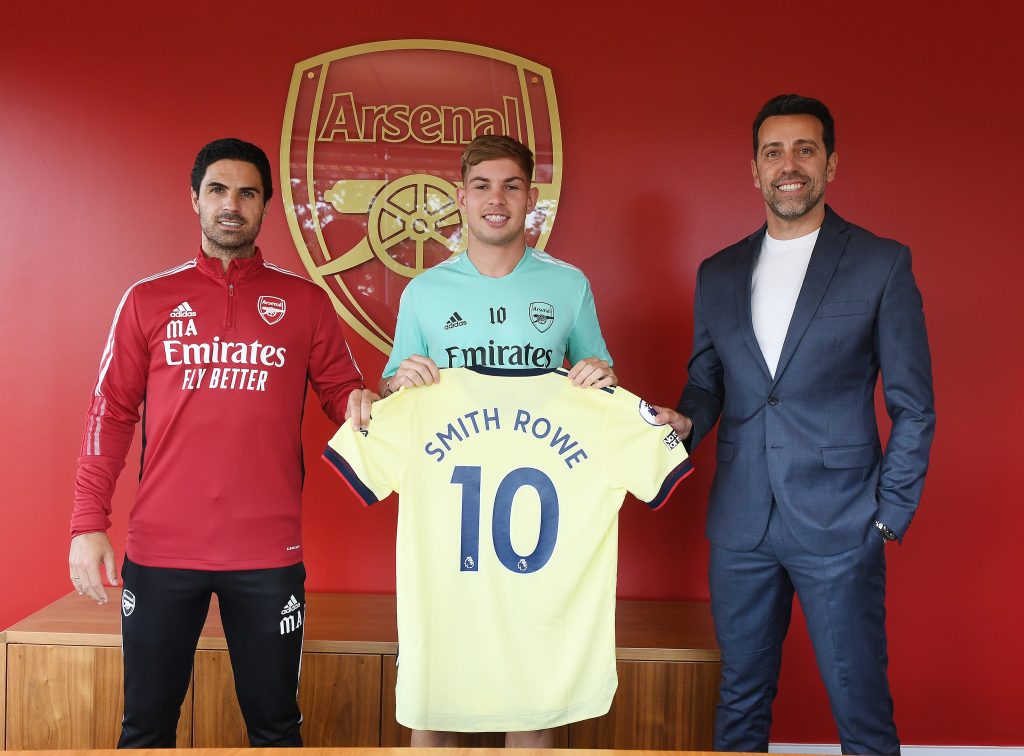 With a new five-year contract and the famous number 10 shirt to boot, Emile Smith Rowe is here to stay at Arsenal (sorry Aston Villa).

The club clearly value their Hale End academy graduate quite highly, as this contract extension proves, so let us explore why that is the case by taking a look at some numbers.

Modern football requires a fair amount of tactical flexibility and willingness to change for the best sides to succeed, which is why a player who can operate in multiple roles is invaluable. 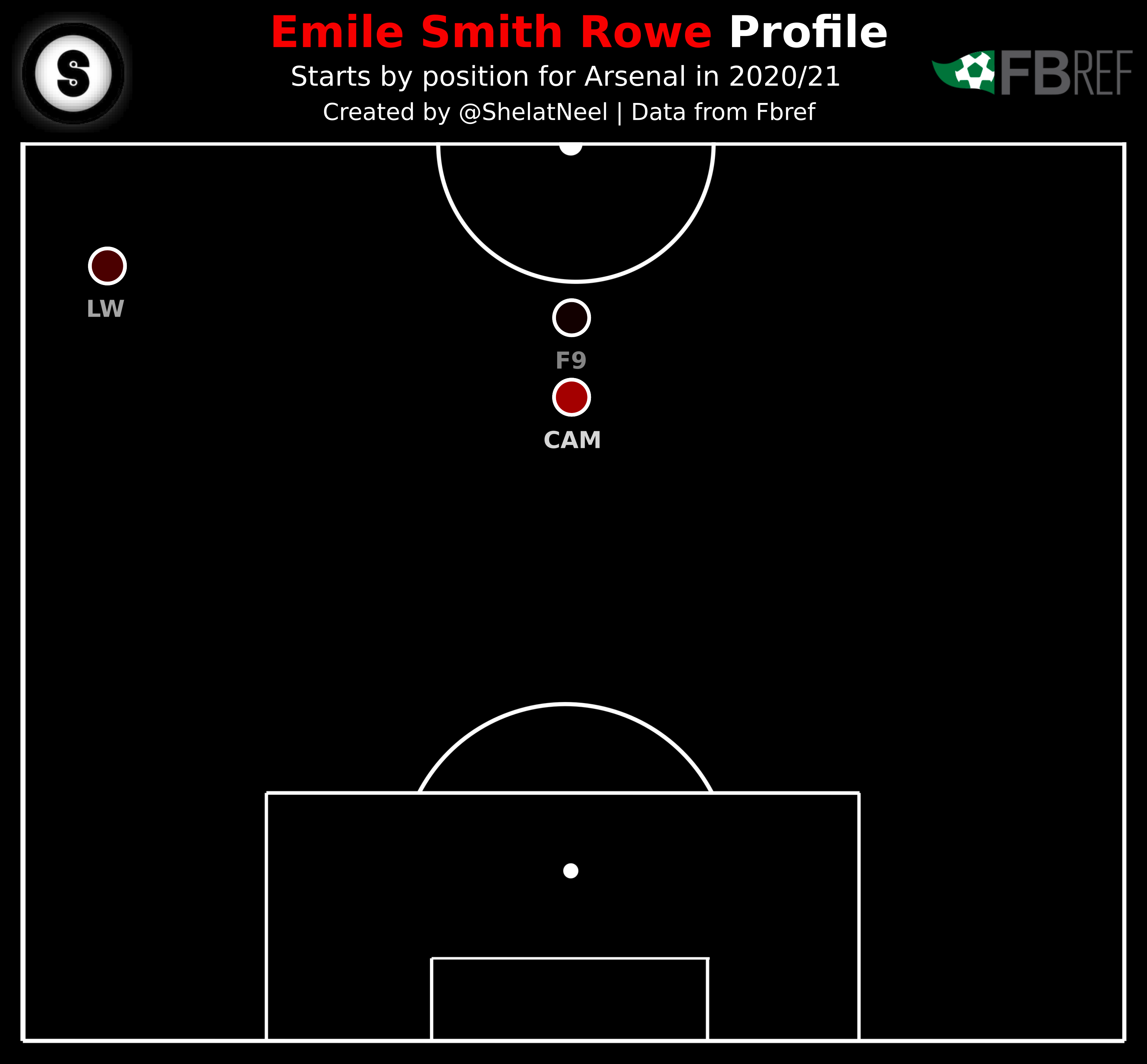 Primarily operating as a number 10, Smith Rowe has also shown himself capable of playing on the left-wing and, on the odd occasion, as a false nine.

Mikel Arteta used five different formations in the 2020/21 season, so he could use a player with such adaptability.

Smith Rowe’s versatility, however, is not restricted to the positions he plays, as the roles he plays within those different positions is also an important facet of his game.

While operating as a central attacking midfielder, the 20-year-old Englishman took nearly 46% of his touches out wide in the wings.

This points to a tendency to drift wide and help his side in the build-up phase, not too dissimilar to what Bruno Fernandes does at Manchester United. 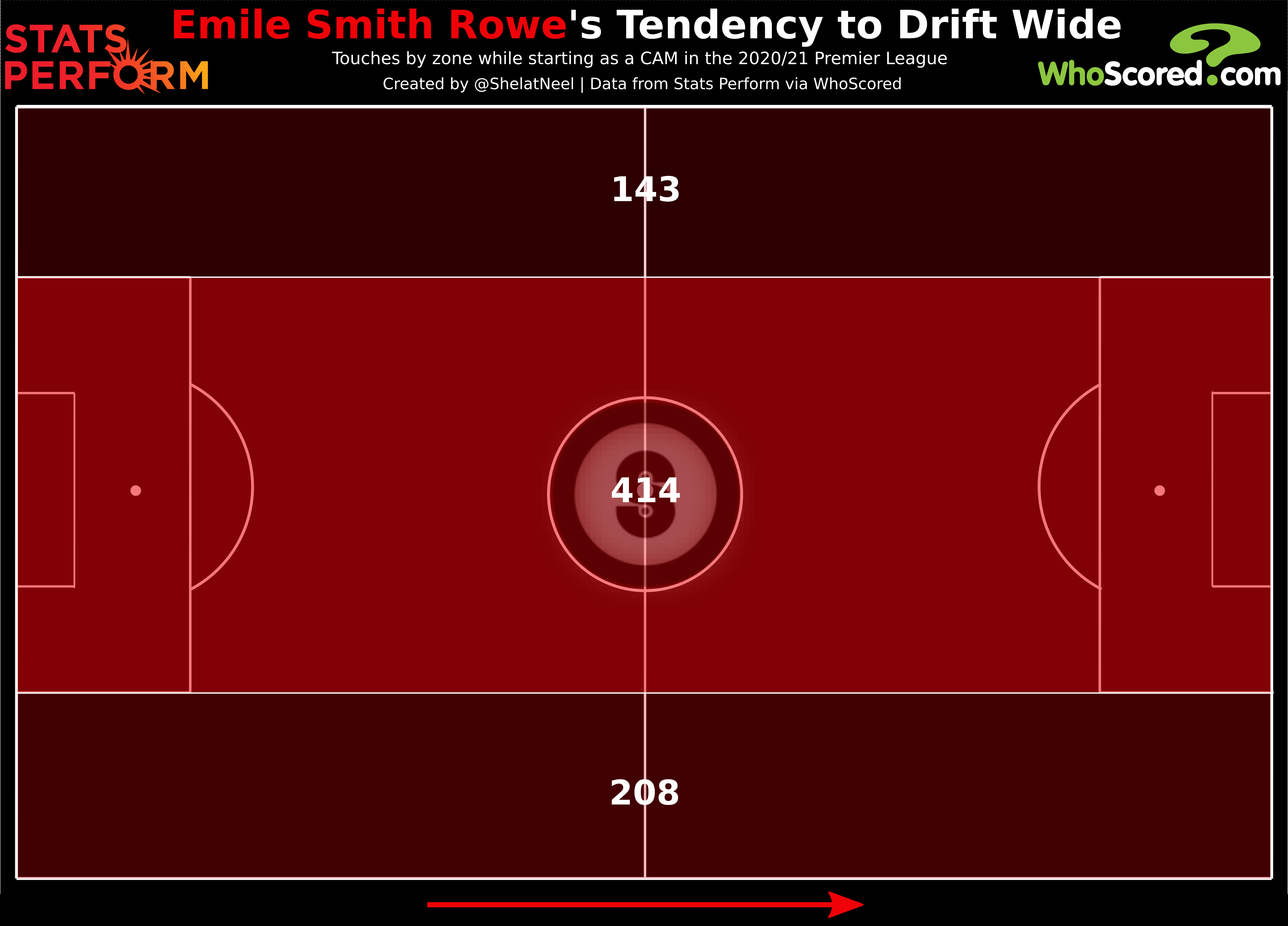 What this does is that it enables the wingers to focus more on their attacking play in the final third, which, when you have the likes of Nicolas Pépé and Pierre-Emerick Aubameyang (who are tricky attackers but not the best link-up passers) is an important dynamic.

Secondly, when starting on the left flank, Smith Rowe does not seem to function as a traditional left-winger, as his heatmap testifies. 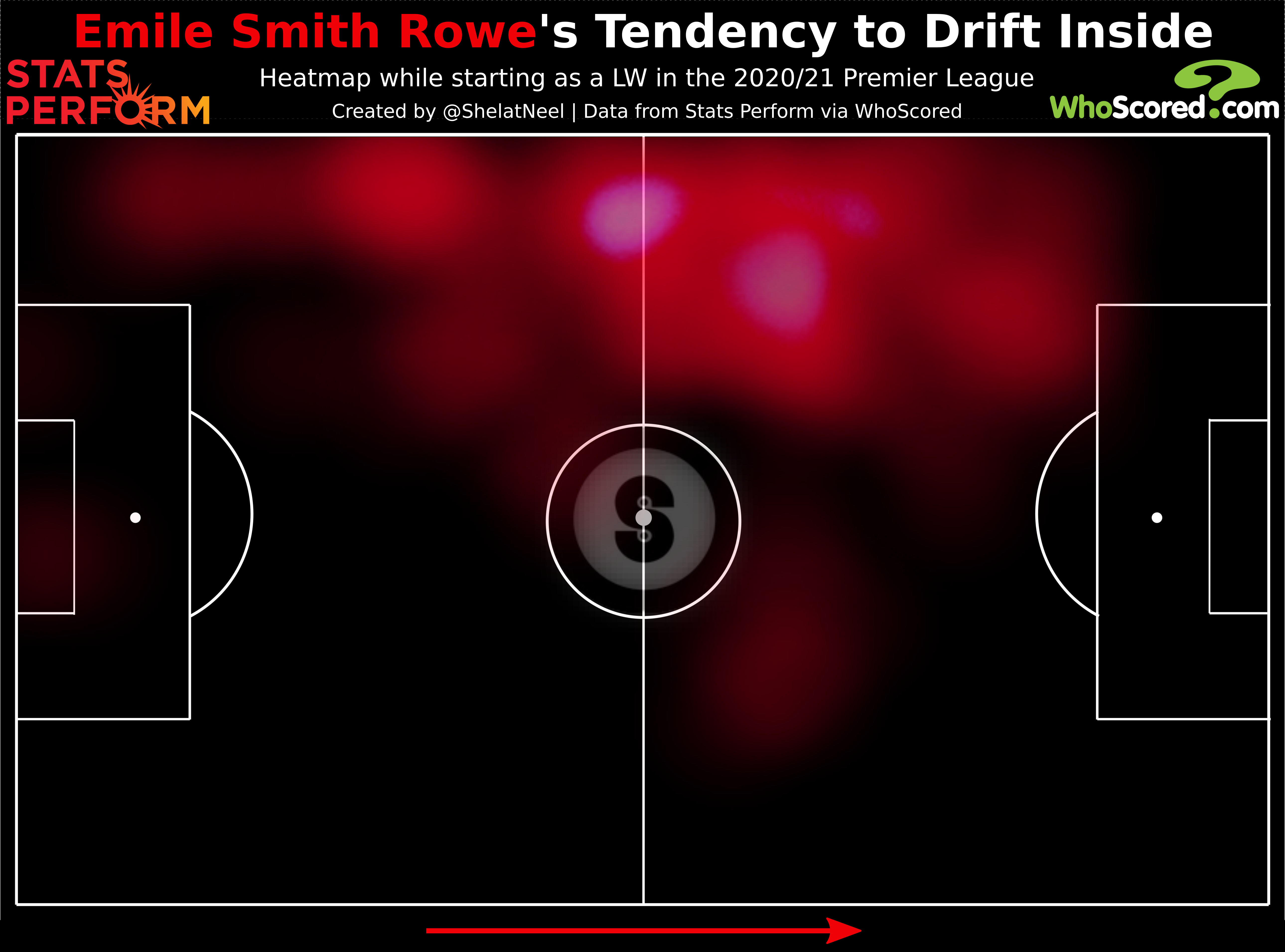 Instead, the England under-21 international operates in significantly deeper areas and likes to cut inside to the left half-space, staying clear of the real danger area in and to the left on the box.

This means that while Smith Rowe is not involved greatly in terms of crossing or shooting, he vacates the space on the flank for an attack-minded overlapping left-back to exploit.

Arsenal now have two of those in Kieran Tierney and new signing Nuno Tavares, so the Englishman’s traits are again suited to his teammates’ strengths while playing off the left.

Despite playing less than half a season’s worth of football in the Premier League, ‘The Smith’s (as Tavares says) four assists made him Arsenal’s second-best provider.

Having been given the #10 shirt, it is easy to imagine that Smith Rowe’s creativity is outstanding, which would be a correct assumption.

To add to that, his involvement in his side’s approach play is crucial, as he is often responsible for the action that takes them into the goal-scoring area.

Involvement in 51% of his side’s total xG via the build-up is testament to that fact. 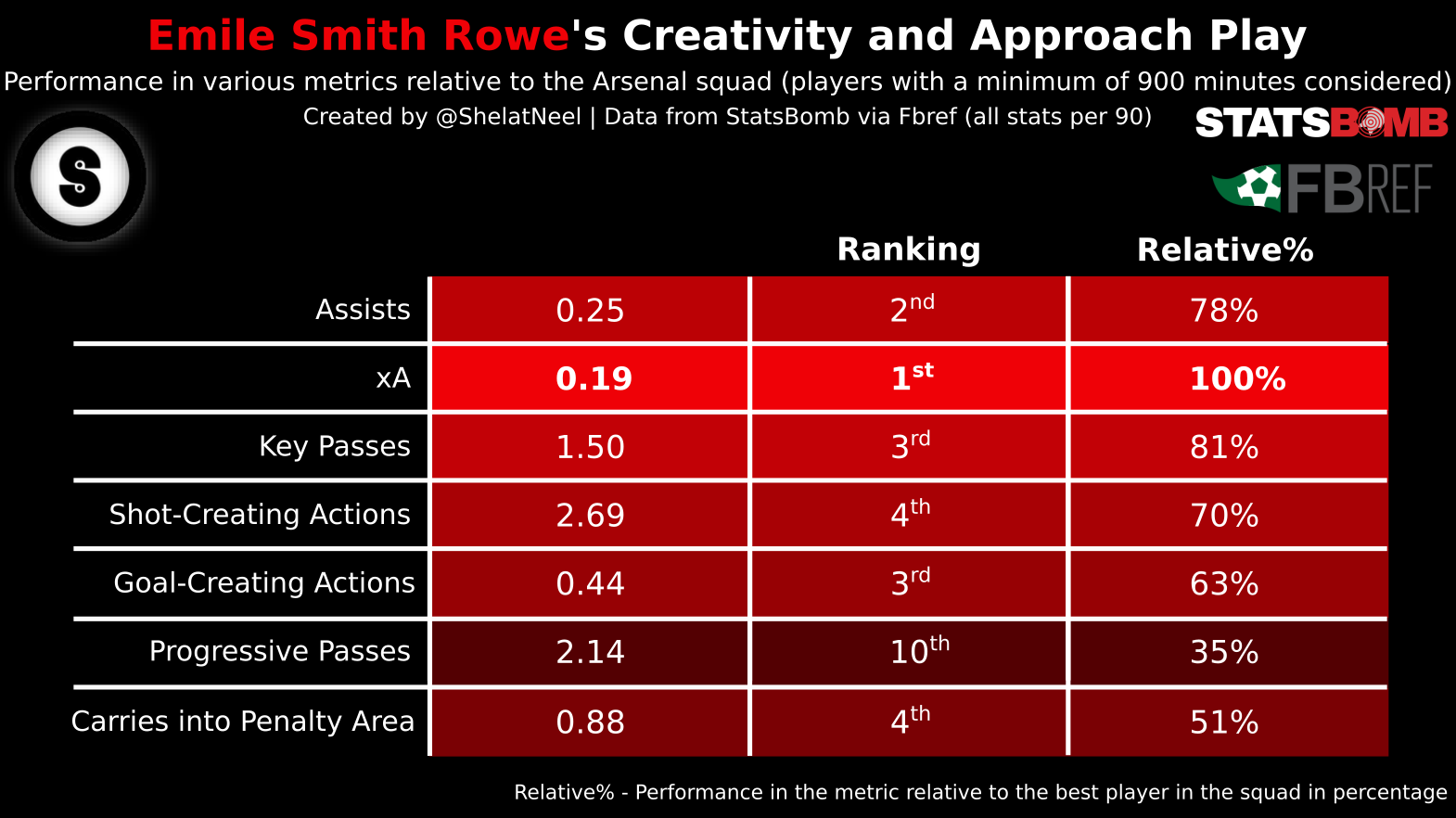 Smarterscout gave him a highest-possible rating of 99 in terms of link-up passing in the 2020/21 Premier League, so that is another one of his many strengths.

This sort of genuine creative quality is something that Arsenal have lacked since Mesut Özil’s game time started deteriorating, so a player of Smith Rowe’s style is certainly one that they will prize.

On most occasions, Arteta likes to employ a fairly high press with Arsenal, so he needs his attackers to work hard off that ball as well, which Smith Rowe clearly does. 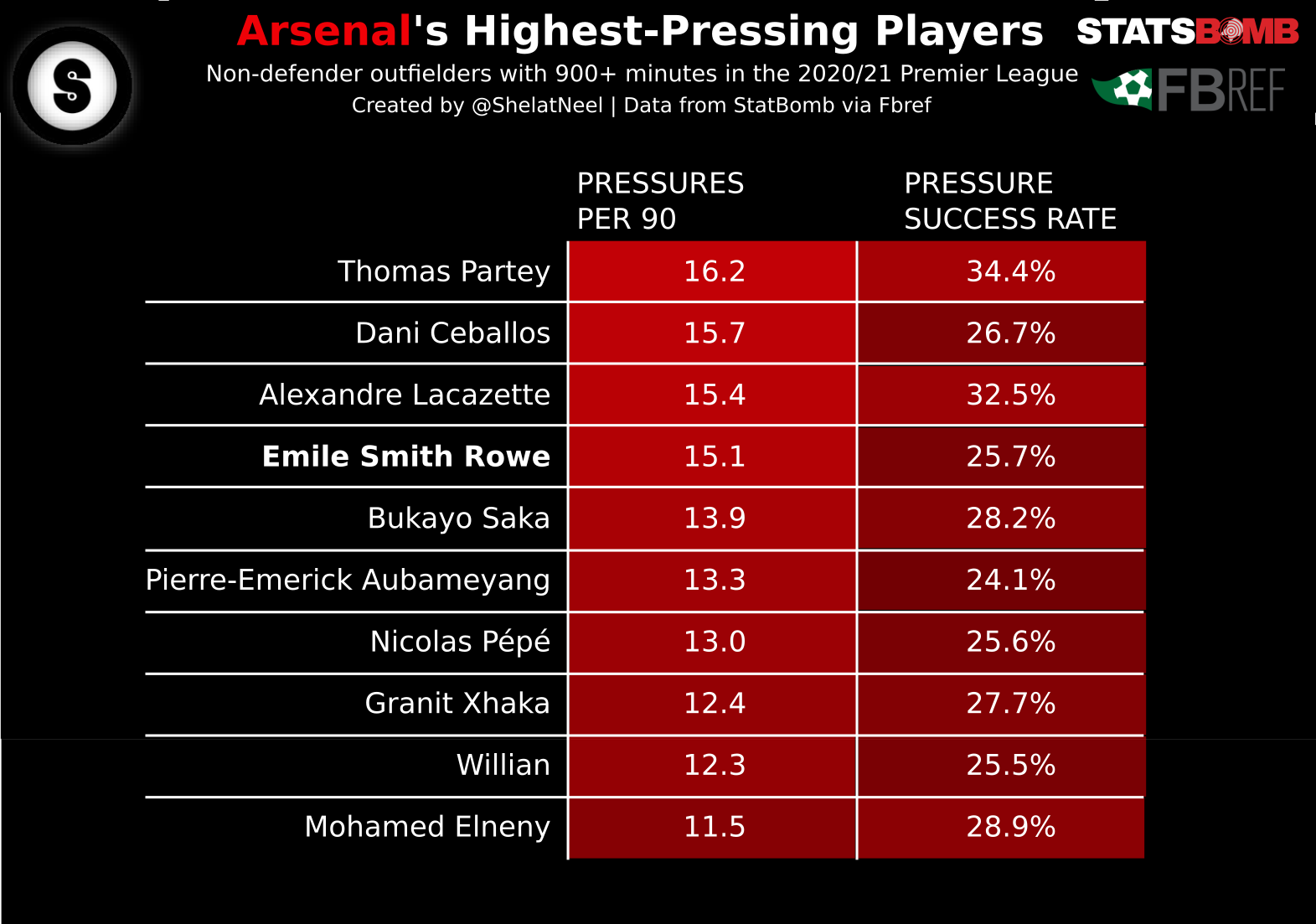 The top two in this list are midfielders, both of whom averaged over 6 pressures per 90 in the defensive third.

Therefore, as far as pressing high up the pitch is concerned, Smith Rowe was effectively the second-most involved behind Alexandre Lacazette.

To put it simply, Arsenal value Smith Rowe very highly just because he is that good.

The 20-year-old creator featured in 20 of the 38 Premier League matches in 2020/21 after getting his first start on Boxing Day, and in those matches, Arsenal picked up 40 of their total 61 points – just under two-thirds!

Arteta also praised the Hale End academy graduate’s ‘attitude and willingness to learn’ while discussing his new contract, so he has yet more scope to grow and improve.

Already, though, Smith Rowe has established himself as one of the key players in the current Arsenal set-up, so it is up to the rest of the squad to step up and match his level to take the Gunners back up to the European spots in the Premier League table.