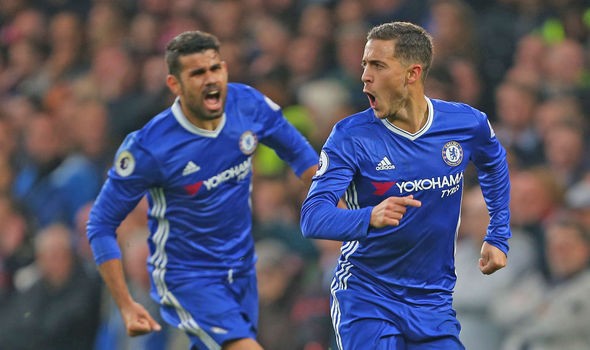 When reviewing the Most Valuable Offensive Player (MVOP) rankings, we often talk about individual performances. This week though, we look at the top 1-2 combos in the English Premier League. Probably not surprising for most, Chelsea duo Diego Costa and Eden Hazard are currently the most valuable tandem in the EPL this season.

Last season, Leicester City’s Jamie Vardy and Riyad Mahrez set the gold standard for top performance by a duo. What made their performance impressive was not that they earned a combined 45.19 points, but that that total ended up being 56% of the total points earned by Leicester. This means, if neither Vardy nor Mahrez had played last season, Leicester City would have roughly earned 36 points and would have therefore been relegated.

As for this season, Costa and Hazard are proving to be the critical pieces behind the offensive success of Chelsea. They have paired up to earn 30.35 points for their side thus far. This amount makes up 48% of the total points earned by Chelsea. Looking at the table below, you can see that they have earned 6.62 points more than the second most valuable duo:

On the individual side, Harry Kane looks destined to take over the top spot in the MVOP rankings quicker than we expected. The Tottenham striker has inched within .3 points from the top and looks absolutely unstoppable. Don’t be surprised if we announce a new leader in our upcoming article. 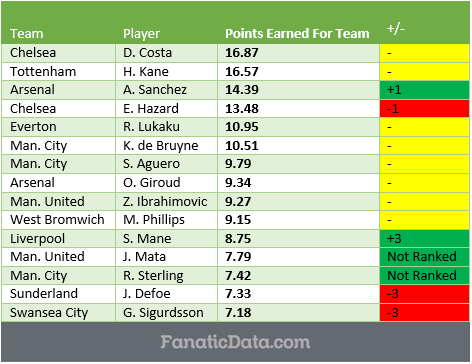 We determined the Most Valuable Starting Squad through Matchday 26 utilizing the most commonly used formation in the Premier League: 4-2-3-1 (excluding goalies). 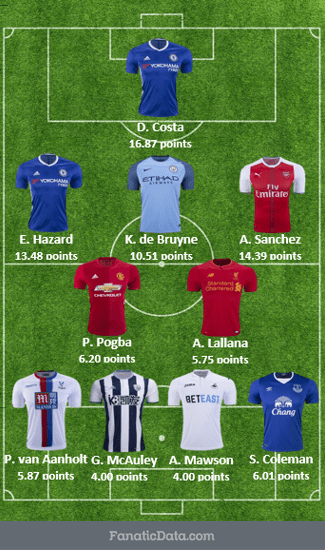 The starting squad had remained relatively steady over the past 6 matchdays.  This week however, the defensive side of the squad saw significant changes. Patrick van Aanholt, Gareth McAuley and Alfie Mawson all joined the squad for the first time this season. McAuley became the first West Bromwich Albion player to make the side.

Continue following us to see the latest rankings and starting squad after Matchday 28.