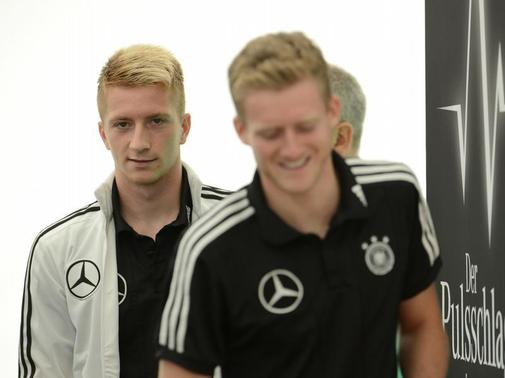 Reports today from the Daily Star have stated that Chelsea are willing to sell Andre Schurrle to Wolfsburg to fund their move for Marco Reus. Jose Mourinho is a big fan of the Borussia Dortmund midfielder and with him being available for a relatively cheap price of €25 million in the summer, it is an opportunity the manager will not want to let up.

Schurrle has struggled to find his way into the Chelsea starting line-up regularly this season, making just 5 starts in the Premier League. There have reports of the club wanting the player to stay, but an enticing offer of £23 million has been reportedly received from Wolfsburg. Chelsea bought Schurrle for £18 million in the summer of 2013 from Bayer Leverkusen, and will thereby make a profit on the deal too.

Chelsea face a lot of competition for Reus’ signature though, with Manchester United, Real Madrid, Arsenal and Bayern Munich all interested in capturing the services of the talented German.

In other news, Real Madrid full-back Alvaro Arbeloa is set to snub Chelsea along with Arsenal and prefer a move back to his old club, Liverpool, the Express have reported.

The Spaniard left Anfield for the Spanish capital in 2009. After playing regularly in the first few years, Arbeloa is now frustrated at the lack of game time he is receiving. Manager Carlo Ancelotti prefers youngster Dani Carvajal at right-back, and it doesn’t look like Arbeloa is going to replace him anytime soon.

The 31 year-old reportedly wants to move to a club where he can find some regular football. Arsenal and Chelsea had him on his radar, but it has now emerged that his preferred destination is Merseyside.

Arbeloa made 98 appearances for Liverpool during his two seasons with the club between 2007 and 2009, before moving to the Santiago Bernabeu for £5 million. Here, he has won 7 trophies, including a La Liga crown, 2 Copa Del Rey’s and a Champions League.

Even though Lionel Messi’s £200 million move to Chelsea is the most unlikely story to come out this January, the Argentine has thrown his future in doubt by admitting he doesn’t know where he will be next season.

“I don’t know where I will be next season,” he said. “I would like to finish with Newell’s [the club from his hometown of Rosario]. As Cristiano Ronaldo says, only God knows the future. Things in football can change overnight.”

This was before he missed out on the Ballon d’Or trophy in Zurich last night, finishing second to Cristiano Ronaldo for the second time in a row.

Lionel Messi fuels talk of Barca exit by saying he does not know where he will be next season http://t.co/7gRQT87P4i pic.twitter.com/kks04jMfsH

Chelsea to move for Ings?

In some surprising news to emerge on the Daily Star today, Jose Mourinho is thinking of signing Burnley striker Danny Ings.

The 22 year-old was fantastic in the Championship last season, scoring 21 goals as Burnley were promoted to the top-tier. This season, he has netted 6 times in 18 appearances in the Premier League.

Chelsea missed out on Croatian forward Andrej Kramaric to Leicester City and are reportedly intent on bringing in another striker to their squad despite already having Diego Costa, Didier Drogba and Loic Remy. But with Drogba being 36 and set to leave at the end of the season, Mourinho wants to bring in a replacement without waiting for the last moment.

Ings is out of contract at Turf Moor at the end of the current campaign and therefore, Sean Dyche might want to make sure the club make some money out of his sale rather than letting him go for free in the summer.